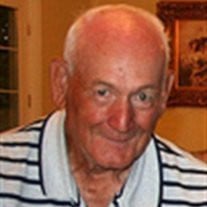 Wilferd Edward Barrett was born to Wilferd Joseph and Lucille Barrett on July 24, 1930 at Urbandale, Iowa. He joined Sisters Jane, June and Winnie. His sister Carol Ann was born a few years later. Willie Barrett went to high school in Colo Iowa where he excelled in most of the sports he played. In baseball he had an unassisted triple play. He earned a football scholarship to Buena Vista College in Storm Lake, Iowa where he met Jean L. Waisner from Gillett Grove, Iowa. They were married on October 29, 1950. Willie was drafted during the Korean War. He spent his military career as a Drill Sergeant training soldiers at Fort Lee, Virginia. After he was discharged from the army he returned to Colo, Iowa where he worked in his father’s grocery store. In 1956 Will and Jean bought a grocery store in Collins Iowa. When the Barrett’s move to Collins Will started going by Bill. Bill and Jean raised four children Sandy, Donna, David, and Karen. David died of a brain tumor in 1967. Bill and Jean owned Barrett’s Grocery in Collins for 33 years then bought B & C Food Center in Dyersville. In 2004 they moved back to Collins where they lived until 2013. In April 2013 Bill and Jean move to Indian Creek Assisted Living in Nevada, Iowa. Bill passed away on Saturday, November 9, 2013 at Mercy Hospital in Des Moines, Iowa. He was preceded in death by his parents, three sisters, and his only son, David. He is survived by his wife, Jean, daughters Sandy (Mike Clem), Donna (Tom Kimberley), and Karen (John Vallandingham) and sister, Winnie Lounsberry.

The family of Wilferd Edward Barrett created this Life Tributes page to make it easy to share your memories.

Wilferd Edward Barrett was born to Wilferd Joseph and Lucille...

Send flowers to the Barrett family.