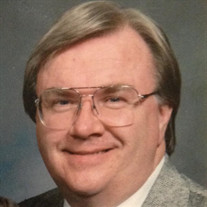 Tom Michel, 70, of Ankeny Iowa passed away peacefully holding the hand of the love of his life on the morning of December 11, 2014. Tom had bravely fought brain cancer for the last 22 months. His stubbornness keeping him fighting for much longer than was expected. He is survived by his wife, Linda; son, Todd (Debi) Michel; daughters, Tammy (Cliff) Herriott, and Kris (Kent) Halsne; and his sister, Marlene Johnson. Tom's greatest joy were his grandchildren Morgan, Jake, Cameron, Rylee, Cale, Brody, Regen, Renna, and his great granddaughter Delaynee Mae. His favorite hobby was spending time with family and attending his grand children's sporting and school events. If those events landed on the same day in 3 different towns, he would make it to all of them. He also loved spoiling them with trips to Walmart for the toy of their choice. He is preceded in death by his parents David and Roberta Michel, and his brother, David Michel. He was born on August 8, 1944 in Shelton, Nebraska. He attended Grand Island High School in Nebraska and graduated in 1962. Shortly after graduating high school, he met Linda Hausmann and fell madly in love. For the next 50 years they lived in several places and settled in Ankeny, Iowa in the early 70's. They raised 3 children, went on many fun vacations, and enjoyed just being together. While Tom was not known for his fashion sense, he was so generous, he would give anyone the shirt off his back. A Celebration of Life Gathering will be held at the Lakeside Center 400 NW Lakeshore Drive in Ankeny, Iowa on Saturday, January 24, 2015 from 12:00 pm -2:00 pm. In lieu of flowers donations may be made to the family in loving memory of Tom or ASPCA.org (American Society for the Prevention of Cruelty to Animals).

Tom Michel, 70, of Ankeny Iowa passed away peacefully holding the hand of the love of his life on the morning of December 11, 2014. Tom had bravely fought brain cancer for the last 22 months. His stubbornness keeping him fighting for much longer... View Obituary & Service Information

The family of Tom G. Michel created this Life Tributes page to make it easy to share your memories.

Send flowers to the Michel family.