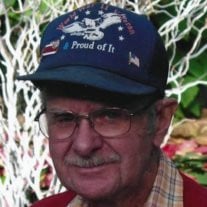 Thelbert “Theb” Vogt, 93, was born, November 28, 1920 in Maxwell, Iowa. He passed away Wednesday, December 25, 2013 at the Kavanagh House in Des Moines, Iowa. Thelbert served in the United States Army during WWII until his Honorable discharge. He worked for Denniston and Partridge as head yardman for many years before his retirement. He is survived by his daughters: Lynnette Schnetzer of Elkhart, IA and Peggy Priest of Waukee, IA; granddaughters: Laura Butler (Tim) of Elkhart, IA, Melanie Bennett (Danny) of Ankeny, IA, Melissa Johnson (Trey) of Memphis, TN, great grandchildren: PFC George Butler, Gabrielle Butler, Sammy and Aidan Bennett, and Jayden Johnson, and several nieces and nephews. He was preceded in death by his wife Laura, great grandson, Ryan, and his son-in-law, Hank. Funeral services for Theb will be 2:00 PM, Sunday, December 29, 2013 at the Elkhart Christian Church. His family will greet friends for one hour prior to services at the church. Burial with Military Honors will follow at Ankeny Memorial Gardens. Memorial contributions may be made to American Diabetes Association or the Elkhart Christian Church in loving memory of Theb. On-line condolences, www.DyamondMemorial.com

The family of Thelbert "Theb" Vogt created this Life Tributes page to make it easy to share your memories.

Send flowers to the Vogt family.