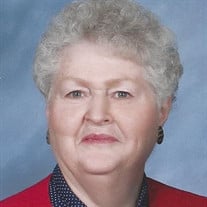 Sonja Faye Bennett was born to a Norwegian lady, Laura Cristina Odson, and Edgar Andrew Bennett on the family farm north of Corning, Iowa. She had 4 sisters, twins Elizabeth and Laura (Laura died at a young age), Hazel and Carma, and one brother, Victor, who died in infancy.   Sonja’s family attended the Strand Lutheran Church and it was during her confirmation that she realized that her faith must be a personal faith. She understood she must accept Christ ‘s work on the cross for her salvation. She attended Corning High School and was active in 4-H and Future Homemakers of America .  She held many local and county leadership positions in both organizations.  She also had training in the secretarial field, but her real desire was to become a homemaker.  During her junior year of high school, she met a handsome young soldier, Don Walter, through his cousin, Max Walter, and her older sister, Elizabeth.  After their first skating date, they both dated each other exclusively. On her graduation day from high school Don presented her with an engagement ring.  After working nearly a year as the ISU Extension Director’s secretary, Sonja Bennett and Donald Walter were married on April 14, 1957.  Together they established their home on the farm that had been in the Walter family for many years.  Nancy, Carol and David were born to the union and she was able to be a stay-at-home mother. Sonja used her many gardening and canning skills to help provide for her family.  She was an excellent cook and used her abilities to minister to others.  She took a cake decorating class and made many cakes including her parents’ 40th and 50th Anniversary and both daughters’ wedding cakes.  Over the years Sonja taught children’s classes at Grace Baptist Church, Iowa Regular Baptist Camp, and Rio Grande Bible Institute.  She loved children and continued over the years to build relationships with young people and touched many lives with her teaching. She was also active in choir ministries. She loved making beautiful quilts and in her later years made quilts for each of her grandchildren.  Her sewing abilities included making clothing for her family. She took joy in sewing Nancy’s wedding dress and bridesmaid dresses for both daughters.  She taught community education classes on cooking, quilting, and sewing. After over 30 years of farming, Sonja and Don both desired to commit more time in serving the Lord, so in 1987 were commissioned by Grace Baptist Church as home missionaries.  They have served for over 25 years at both Rio Grande Bible Institute in Edinburg, Texas, during the winter and Iowa Regular Baptist Camp in Ventura, Iowa, in the summer. They also volunteered at Faith Baptist Bible College in Ankeny, Iowa. Sonja leaves behind her loving husband, Donald, daughter Nancy Garwick (Randy), daughter Carol Tustin (Warren), son David Walter (Jennifer), grandchildren,  Jesse, Jared, and Laura Garwick; Jenna, Trevor, and Ryan Tustin; Jordan, Jonathan and Katelyn Walter; sisters, Hazel Richards and Carma Lundquist; many nieces and nephews and great nieces and nephews. Sonja Walter is preceded in death by parents, Edgar and Laura Bennett, sisters, Elizabeth Bowman and Laura Bennett, and brother, Victor Bennett. The family will greet friends from 3:00 – 6:00 p.m. Sunday, June 22, 2014 at Grace Baptist Church (1801 Quincy St, Corning, IA). Funeral services will be held at 10:30 a.m. Monday, June 23, 2014 at Grace Baptist Church with Pastor Dan Lamgo officiating. Burial will be in Methodist Grove Cemetery. Memorial contributions may be directed to the Iowa Regular Baptist Camp for a laundry room remodel in memory of Sonja. Proverbs 3:5-6 Trust in the LORD with all your heart and lean not on your own understanding; in all your ways submit to him, and he will make your paths straight.

Sonja Faye Bennett was born to a Norwegian lady, Laura Cristina Odson, and Edgar Andrew Bennett on the family farm north of Corning, Iowa. She had 4 sisters, twins Elizabeth and Laura (Laura died at a young age), Hazel and Carma, and one brother,... View Obituary & Service Information

The family of Sonja F. Walter created this Life Tributes page to make it easy to share your memories.

Send flowers to the Walter family.