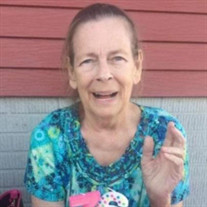 Sandra Jean Van Dorn 80 years old was born on August 29, 1941 in Des Moines, Iowa. She is survived by a butt load of children, her favorite being Timmy, grandchildren and great grandchildren, fertility was not a problem! Robert Taylor, Dawn Zenors, Jeff Eggleston, Billy Joe Van Dorn, Edwin Van Dorn, and the favorite golden boy, Timmy Van Dorn. Her genetics were passed on, so we aren’t listing the buttload of grand and great grandchildren that she loved. In her younger years she enjoyed going to the demolition derby ‘s, coon hunting, the woman could shoot a mouse with a 22. Her grandchildren often called her a gangsta. Her energy was bigger than her body could keep up with, she loved scrapping copper any chance she got. She was a moneymaking hustling little woman, with a fighter strength and a soul of a warrior. She retired from Firestone, working a job most men could not do. She loved getting mani’s, pedi’s and perms. If you didn’t know her, you’re probably picturing a masculine woman, especially since she loved fried deer loin sandwiches, morel mushrooms and homegrown tomato sandwiches. She was not masculine at all she loved her floral prints, collecting porcelain dolls and her soap operas, and the highlight of her day was early morning gossip sessions with her golden boy son, Timmy. She spent hours every day playing games on her computer and likes canasta, but never missed an opportunity to watch out the window for something to gossip about. To say her heart was larger than her body is a major understatement. She was always there to take in a child and to love them like her own and maintain that love for each and every one of them, even in her final moments. Y’all know who you are, you’ve contributed to the gray hairs! Her only real tradition was making homemade stuffing everything for Thanksgiving with of course the golden boy, you’ll find him in a fetal position sucking his thumb because being ripped away from his momma’s tit, so as you can tell this has been very traumatizing for him. Timmy also expressed that mom ‘s final wishes was for everyone to feel free to take Timmy out for steak dinners, he loves Texas roadhouse! She passed away peacefully with golden boy right next to her on November 19, 2021, in Prairie City, Iowa. Graveside services will be 11 AM, Wednesday, November 24, 2021, at the Waveland Cemetery in Prairie city, Iowa. Memorial contributions may be made to the family in loving memory of Sandra.

Sandra Jean Van Dorn 80 years old was born on August 29, 1941 in Des Moines, Iowa. She is survived by a butt load of children, her favorite being Timmy, grandchildren and great grandchildren, fertility was not a problem! Robert Taylor, Dawn... View Obituary & Service Information

The family of Sandra Jean VanDorn created this Life Tributes page to make it easy to share your memories.

Send flowers to the VanDorn family.