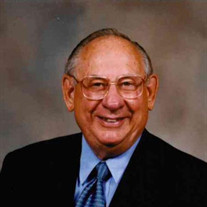 Rudolf Trusheim was born near Hubbard, Iowa on March 17, 1928 and passed away December 2, 2021 entering the mansion Jesus has prepared for him. He was the second of eight children born to Jakob and Emma Krueger Trusheim and lived most of his childhood on the family farm near Marshalltown. During his late teens, he accepted Jesus as his Savior and felt a call to the ministry. He graduated from Westmar College in 1953 and The Evangelical Theological Seminary in Naperville, Illinois in 1956. During his years in seminary he served as a student pastor at Peoples Evangelical United Brethren Church in Symerton, Illinois where he met Ruth Austin. Rudy and Ruth were married in 1955 and moved to Iowa following Rudy’s graduation. Rudy served as pastor to Evangelical United Brethren and United Methodist churches in Russel, Hubbard, Radcliffe, Dumont, Des Moines and Waterloo before his retirement in 1993. He also served as the Fort Dodge District Superintendent. Rudy was very active in the Iowa United Methodist Conference. He enjoyed serving on the Board of Ordained Ministry which allowed him to become a mentor to many young pastors. Following retirement, Rudy was a member of Staves Memorial United Methodist Church in Des Moines. He remained active as a minister including performing the marriages of his grandchildren and baptizing his greatgrandchildren. He served as chaplain of the Sertoma Club of Des Moines and worked at Consumer Credit Counseling Service of Des Moines. He enjoyed golfing, gardening and caring for his lawn. Rudy and Ruth traveled extensively visiting the Holy Land, Alaska, Hawaii, Europe and Canada on a Queen Mary II tour to celebrate their 50th wedding anniversary. Rudy is survived by his loving wife, Ruth of 66 years; sons, Mark (Beth) Trusheim of Morris, Illinois and Paul Trusheim of Duluth, Minnesota; grandchildren, Brian (Rebecca) Trusheim of Yorkville, Illinois and Jennifer (Matthew) Lange of Mequon, Wisconsin and greatgrandchildren, Shelby, Kaylie, Anna, Calvin and Mason; brother Wilbert (Jackie) Trusheim of Bettendorf, Iowa and many nieces and nephews. He was preceded in death by his parents; brothers, Henry, Paul, Raymond, Harold and sisters, Anna and Helen. A Celebration of Life Service will be 11 AM Monday, December 6, 2021, at the Staves Memorial United Methodist Church. Visitation will be 10 AM until service time. Burial at 2 PM Monday, at Rose Hill Memorial Gardens Cemetery in Marshalltown, Iowa. Memorial contributions may be made to Staves Memorial United Methodist Church in loving memory of Rudolf.

Rudolf Trusheim was born near Hubbard, Iowa on March 17, 1928 and passed away December 2, 2021 entering the mansion Jesus has prepared for him. He was the second of eight children born to Jakob and Emma Krueger Trusheim and lived most of his... View Obituary & Service Information

The family of Pastor Rudolf Trusheim created this Life Tributes page to make it easy to share your memories.

Send flowers to the Trusheim family.