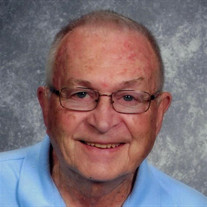 Robert “Bob” Phillips, 83, after a long battle with cancer, passed away on October 15, 2017 at Mercy Hospice Johnston surrounded by his family. Bob was born to Leslie and Lois (Herren) Phillips June 1, 1934 in Macksburg, Iowa. He graduated from Adel High School in 1952. He then went on to AIB where he graduated from Comptometer School. He enjoyed a 44 year career with Plumb Supply Company, where he retired as Vice President of Marketing. He loved interacting with his customers and had great friendships with them. His straight forwardness, honesty and respect for people were true blessings. After his retirement, he worked at Saturn shuttling people and delivering cars. He later went on to transport children for the Adel Schools. He would come home and share the stories and laughter they had while riding to and from school. He always believed it was very important for the kids to start their day happy and positive so he would sing to them just to watch them smile and wave to them when they left the van. He always made sure to say “behave and have a nice day”. Bob had a passion for sports, whether it be to participate, coaching his son’s baseball teams or watching the ISU Cyclones and the Chicago Cubs on t.v. He was an avid golfer in his earlier years and later years enjoyed watching his kids and grandkids play sports. Bob looked forward to his morning meetings (as he called it) at Patrick’s in Adel for breakfast. He enjoyed the company of his friends and the friendly staff, that he grew close to and thought of as family. He enjoyed listening and contributing to the conversations on solving the problems of the world. Bob was a member of the Waukee Christian Church, Lyons Club, Shriners International, and served on the Altoona City Council for four years. Bob married Cathy Sapp on January 21, 1989. He was a loving and devoted husband for 28 years. Bob felt very blessed to be surrounded by family, friends and those that cared for him. His loving heart, sense of humor and charisma made him a joy to be around. Survived by his loving wife, Cathy; his children, Randy (Pam), Greg (Cheryl), Doug (Carla), Kim (Monty) Banks, Melanie (Clint) Ruggles and Amber (Jon) Reves; 16 grandchildren, Zach, Tanner, Danielle, Kirsten, Justin, Bret, Stephanie, Jake, Samantha, Austyn, Sarah, Amy, Zak, Sam, Allie and Thomas; 21 great grandchildren; his siblings, Dorothy Jensen, Mary Lou Youmans and Tom (Laurel) Phillips; and many other family and friends. He was preceded in death by his parents; his brother, Dean Phillips and a great granddaughter, Kylie Jean Phillips. A Celebration of Life Service will be at the Waukee Christian Church, 29043 T Ave., Waukee, Ia, Thursday, October 19, 2017 at 10:30 AM. Burial will follow at the Oakdale Cemetery in Adel, Ia. Visitation with the family present will be at the church on Wednesday, October 18, 2017 from 5-7pm. Memorial Contributions may be made to the Waukee Christian Church, 29043 T Ave., Waukee, Iowa On-line Condolences, DyamondMemorial.com All floral deliveries may be made to the Waukee Christian Church, 29043 T Ave., Waukee, Iowa.

The family of Robert "Bob" Phillips created this Life Tributes page to make it easy to share your memories.

Robert “Bob” Phillips, 83, after a long battle with cancer, passed...

Send flowers to the Phillips family.