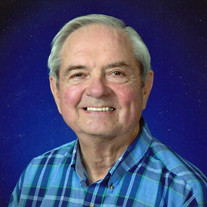 Robert Barker Kruse was born in Iowa City, Iowa on January 5, 1943 to Lucy Ramona Barker and James Barker. He passed away Sunday, November 19, 2017 at Mercy Hospice in Johnston, Iowa. Robert had five brothers, Sam, Charles, Johnny and Lloyd Owen. Robert had two sisters, Lucy and Dores. All his brothers and sisters have passed away. Robert was adopted by Nick and Maria Kruse when he was three years old. Robert was confirmed at Memorial Lutheran Church in Nevada, Iowa. Robert grew up in Nevada and he graduated from Nevada High School in 1961. Robert served in the United States Army from 1961 until his honorable discharge in 1964. After leaving the service he attended Augusta College in Augusta, Georgia. Robert was married to Susan Kruse in 1966. He is survived by his daughter, Leslie Kruse of Orlando, Florida and his son, Rick Kruse, of Blue Ridge, Georgia. Another daughter, Janet Kruse she passed away in 2007 at the age of 35. Robert retired from UPS in 2000. He was a member of the American Legion and the Golden Kiwanis in Nevada, Iowa. He served as Georgia Kiwanis Lt. Governor in 2007. Robert’s hobbies included collecting and working on old clocks, collecting old metal banks, collecting and working on Lionel trains. Robert had open heart surgery March 22, 2016. He was 73 years old “I had a good life and can’t complain”. Robert was like to thank his long-time friend, Myrna Murphy for being his faithful companion for many years together. A Celebration of Life Service will be11 AM, Tuesday, November 21, 2017 at the Memorial Lutheran Church in Nevada, Iowa. Memorial Contributions may be made to the Kiwanis in Nevada, Iowa. On-line condolences may be made at Dyamondmemorial.com Flowers may be delivered to the church.

The family of Robert Barker Kruse created this Life Tributes page to make it easy to share your memories.

Send flowers to the Kruse family.