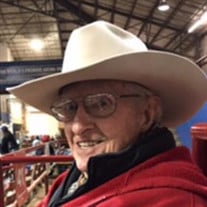 Robert L. Beech (a.k.a.- Doc Beech) was born September 4, 1929 in Des Moines, Iowa to Marie (Carpe) and Gerald Beech. He was later joined by two brothers, Jerry and Dennis. He went to his eternal home on January 1, 2020. Doc grew up on the... View Obituary & Service Information

The family of Dr. Robert Lee Beech created this Life Tributes page to make it easy to share your memories.

Send flowers to the Beech family.