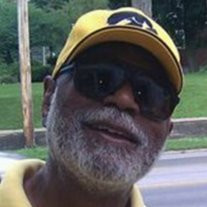 Robert James Battle passed away peacefully on Saturday, July 27th, 2013. He was born in Dallas Texas to his parents George and Emma Battle. He was raised and attend school in Dallas before moving to Des Moines Iowa in 1967. His oldest brother, George III also lived in Iowa at that time. During his time in Iowa, Robert married Christie Nelsen and from that marriage they had two children, Robert Trent and Celeste Marie. He worked at Colonial Bakery in Des Moines before eventually retiring to spend time with his family. After living in Iowa for 44 years, he moved back home to Dallas Texas in 2011 to be closer to his brother Charles and other family. Robert was a family man, he enjoyed spending time and being around his family whenever he had the chance. Family to him didn't necessarily mean you had to be blood related. He had many friends who he considered his family. One thing he was great about was listening. If you had a problem he would listen and help you try to come up with a solution without passing any judgement. Another of his passions was sports, he enjoyed all sports but his favorite teams were the Dallas Cowboys and the Texas Rangers. Some other activities he enjoyed were shooting pool, playing cards, dominoes, fishing, road trips to Louisiana with his brother and nieces, or just sitting and talking with family and friends. Robert was also an excellent cook, he has many sought after recipes some of which are his ham and beans, peach cobbler, his chili, and of course his banana pudding. Robert was preceded in death by both his parents George Sr. and Emma Battle, his brothers George Jr. and John Battle, his sisters Ira Mae and Vivian Raye Battle, and by the mother of his children Christie Battle. He leaves to cherish his memory: son-Trent Battle of Aspen, Colorado; daughter- Celeste Battle of Tallahasse, Florida ; brother-Charles Battle Sr. of Dallas, Texas; step sister-Margaret A. Lewis of Dalla, Texas; aunt- Sarah Fields of Dallas Texas; and a host of nieces, nephews and other family and friends.

Robert James Battle passed away peacefully on Saturday, July 27th, 2013. He was born in Dallas Texas to his parents George and Emma Battle. He was raised and attend school in Dallas before moving to Des Moines Iowa in 1967. His oldest brother,... View Obituary & Service Information

The family of Robert James Battles created this Life Tributes page to make it easy to share your memories.

Send flowers to the Battles family.