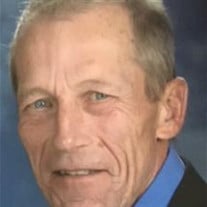 Richard L. Martin left us too soon on June 29, 2018. He is survived by his wife, Sandy, with whom he would have celebrated 50 years of marriage on August 30. Mass of Christian Burial will be 10:30 AM Saturday, July 7, 2018 at St. John’s Catholic Church in Adel, IA. Visitation will be Friday, 4-7 PM with a vigil service at 7 PM at the church. Rick was born in Charles City, Iowa, on February 15, 1946. He was preceded in death by his father, Jim; brothers, Dave and Steve; and mother-in-law Helen Latch, who - in spite of the nastiness symptomatic of her Alzheimer’s - claimed Rick was a saint for moving her into his Earlham home and taking care of her toward the end of her disease. We tend to believe her sainthood claims are evidence of the last remnants of her rationality. Rick served his country with great pride (and some other complex emotions) in Vietnam as a member of the Army. He recently enjoyed reconnecting with others who served in the 82nd Airborne in 1968-1969. He and Sandy also enjoyed an amazing “full circle” trip to Vietnam in 2016. He was looking forward to travelling there again. Rick enjoyed spending time with his five grandchildren, enduring many hours of music concerts and sporting events. He enjoyed good coffee and a nice Shiraz or Malbec, although not too nice; he was a hard worker and preferred putting his money toward his stock market hobby rather than top-shelf wine. Rick loved wintering in Cocoa Beach, Florida, and started complaining about the Iowa cold in early September. Rick’s survivors include Sandy; daughter Nicole (Jon) Ingraham of Urbandale; daughter Natalie (Vladimir) of Portland, Oregon; and five grandchildren: Lina, Leah, Lindsey, Logan and Luka. The first two L’s were a coincidence, but yes, the next three L’s were on purpose. He had a bonus daughter, Priscila, an exchange student from Brazil. He is also survived by his mother, Neva, and siblings, Bob, Bill, Kathy and Tom. Rick will be interred at Iowa Veteran’s Cemetery, arrangements made over 5 years ago which has been a great relief to his family. Please make a note to discuss arrangements with your loved ones. Rick was always ready to lend a hand, so it's fitting that he fulfilled his wish to be an organ donor through the Iowa Donor Network. Memorial contributions can be directed to Ronald McDonald House Charities, where Rick spent a great deal of time as an important part of his granddaughter’s support team, or Alex’s Lemonade Stand Foundation for pediatric cancer research. All floral deliveries may be sent to the church on Friday.

The family of Rick L. Martin created this Life Tributes page to make it easy to share your memories.

Send flowers to the Martin family.