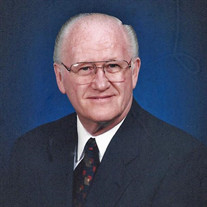 Richard Harold Fleming I loved the Lord his God with all his heart, soul, mind, and strength, loved his neighbors as himself, and served God faithfully his entire life. He loved to study the Bible, was incredibly proud of his children, grandchildren, and great grandchildren, and enthusiastically supported FBBC for sixty years. Richard was called into the presence of his Savior on September 10, 2017. He was born March 17, 1931, in Battle Creek, MI to Georgia (Terwilliger) and Harold Fleming, the oldest of three children, and his family resided in a cottage near Gull Lake, MI. He was blessed to grow up around the Gull Lake Bible & Missionary Conference and he attended all the children’s meetings and evening services there each summer. It was at one of these children’s meetings that he realized he was a sinner and needed a Savior and gave his life to Christ at the age of 12. In high school, he was very active in Boy Scouts, football, basketball, track, band, choir, and a men’s Gospel quartet and was the Salutatorian of the class of 1949 at W. K. Kellogg High School. After high school, he went to Moody Bible Institute in Chicago, IL, majoring in song leading and music, and was part of the Moody Chorale under the direction of Don Hustad. In 1952, he married his sweetheart of seven years, Elnora Mae Stadt. Richard finished his college degree in music at the Grand Rapids School of the Bible & Music in Grand Rapids, MI (now Cornerstone University), and after graduating from college, was an associate pastor at Baptist churches in Grand Rapids, Detroit, and Flint, MI. In 1957, Richard and his bride joined the faculty of the music department at Omaha Baptist Bible Institute in Omaha, NE. They represented the college while traveling extensively, ministering to churches and camps through vocal and instrumental music and the preaching God’s Word. During their time in Omaha, they adopted Deborah Lynne and Richard Harold Fleming II. Richard continued in the music department when the Institute moved to Ankeny, IA, in 1967, and at that time, the college changed its name to Faith Baptist Bible College. In 1973, he accepted the Minister of Music position with Calvary Baptist Church, Muskegon, MI, under the leadership of Mark Jackson. In 1976, he returned to Faith Baptist Bible College as Director of Christian Service and later as Assistant to the President. A highlight of his career was leading the congregational singing at the GARBC National Conference several times. In his retirement years, he spent his time as the interim pastor of several GARBC churches in Iowa and filled the pulpit for many other churches as they had need. He also worked for about a decade at the Ankeny Funeral Home, and after his wife passed away, he ministered at the Sunny View Care Center where his wife had resided. He held a weekly Bible study and also spent time reading scripture and praying with the individual residents of Sunny View until about 8 months before his death. His beloved wife, Elnora Mae (Stadt) Fleming; parents Georgia and Harold Fleming, sister, Ruth Ann Scott, brother-in-law Mel (Eleanor) Stadt, sister-in-laws Dorothy Stadt and Norma Stadt, preceded him in death. He is survived by his daughter, Deborah (Dave) Drake of Neenah, WI, and son, Richard (Angela) Fleming of Berwick, Iowa; grandchildren Kaella (Tom) Wilson of Plano, IA, Kolton (Ashley) Drake of Neenah, WI, Kelley (Adam) Ullmer of Appleton, WI, Richard Harold Fleming III of Berwick, IA, and Joshua (Amber) Fleming of Berwick, IA; great grandchildren Nevaeh, Erinne, Adelyn, Diana, Ashlin, Carter, and two additional unborn great grandchildren due in October and April; brother Jack (Carol) Fleming of Kalamazoo, MI, brother-in-laws Lee Stadt of Belmont, MI, Warren Stadt of Grand Rapids, MI, Bern (Marilyn Stadt) of Hickory Corners, MI, sister-in-law Marlene (Don) Flight of Groton Long Point, CT; and many nephews and nieces. Visitation is Friday, September 15, from 4 to 6 p.m. and Funeral Service Saturday, September 16, at 11 a.m., both at Ankeny Baptist Church, 2842 SW Third Street Place, Ankeny, IA 50023. Graveside service at Ankeny Memorial Gardens following the funeral service. Memorial contributions can be made to Faith Baptist Bible College or Ankeny Baptist Church. The service will be live streamed and here is the link for that: https://livestream.com/accounts/2557717/events/7718344 VISITATION 4PM - 6PM Friday, September 15, 2017 Ankeny Baptist Church 2842 SW 3rd Street Ankeny, Iowa 50023 SERVICES 11 AM Saturday, September 16, 2017 Ankeny Baptist Church 2842 SW 3rd Street Ankeny, Iowa 50023 MEMORIAL CONTRIBUTIONS Ankeny Baptist Church 2842 SW 3rd Street Ankeny, Iowa 50023 or Faith Baptist Bible College and Theological Seminary 1900 NW 4th Street Ankeny, Iowa

Richard Harold Fleming I loved the Lord his God with all his heart, soul, mind, and strength, loved his neighbors as himself, and served God faithfully his entire life. He loved to study the Bible, was incredibly proud of his children, grandchildren,... View Obituary & Service Information

The family of Mr. Richard Harold Fleming created this Life Tributes page to make it easy to share your memories.

Richard Harold Fleming I loved the Lord his God with all his...

Send flowers to the Fleming family.