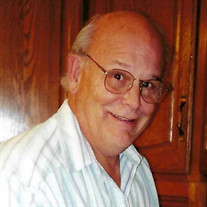 Michael Dean Anderson, 80, passed away from COVID-19 on Thursday, September 2, 2021 at Serenity House Hospice in Oskaloosa, Iowa where he had been a resident of Crystal Heights Care Center in recent years. Mike was born in Des Moines on June 19, 1941 to Ralph T. Anderson and Erla B (McGrew) Anderson. Mike had two older brothers, Jim and Tom who paved the way for him through elementary and middle school. As an alumnus of Roosevelt High School, Mike played football for the Rough Riders and his team won the State Championship in 1958. He graduated in 1959 and headed to college in Colorado, finishing his studies at Grandview University in Des Moines. Following college, Mike joined his parents and brothers in the family business, TJEM. Mike and two of his friends, Ron Sutphin and Chuck Corwin met and discussed potential leads for their businesses. From this collaboration, The Exchange Club began and welcomed other businessmen to their Tuesday morning breakfast club meetings for many years. While helping to build and prosper a successful business career, another union of great pride came to be. In 1969, Mike married Barbara King (Rinell) and to this union three wonderful children were born, Mike, Amy, and Christian. Mike and Barb joined The Variety Club of Iowa when it was in its infancy. Mike cherished his many years of dedicated service and was honored to be the Chief Barker. He found great joy in meeting members from surrounding states and countries and sharing fundraising ideas with them. Millions of dollars were raised here over the years with hospitals, camps and individuals benefitting from the generous donations given through Variety Club of Iowa. Mike was a social and enthusiastic young man. His father, Ralph, purchased multiple properties in Clear Lake, Iowa, creating a summer retreat where the brothers, kids, cousins and parents could enjoy the warm water and easy laughter together at the family lake house. Throughout his life, he relished any endeavor that focused on seeing those around him, overcome life’s challenges and prosper. But his most endearing and enduring legacy was the loyalty and kindness he imparted on his close friends and family. He was a faithful companion to all and he never hesitated to show grace and good-will toward anyone lucky enough to cross paths with him. He loved to talk and ponder life’s most philosophical questions over a hot cup of coffee and his quick wit and raw humor, as well as his constant metaphors, will be missed dearly. As a father, Mike instilled the love of service to community and the beauty of nature in his family. He shared his love of the outdoors, hunting, camping, fishing, and mountaineering with his sons and grandson Alex. He demonstrated the rewards of hard work and integrity to his children, nieces and nephews and his grandchildren. He was “that guy”, who would “give you the shirt off his back” and he did, often. Mike and Barb built a life and a home that made everyone feel safe and loved. He readily welcomed anyone into his home who felt wayward and wary. They were fed, listened to, and replenished. Although, both Mike and Barb remarried and extended their families, they remained great friends and committed parents and grandparents to the end. Mike is survived by his 3 children, Mike (Anika), Amy, and Christian (Catherine); grandchildren Alex, Kendall, Ellie, Elizabeth, Aiden, Isaac and Joel. He leaves behind several nieces and nephews dear to his heart, Scott (Deb) Anderson, Sue (Kenton) Huerta, Andy (Diana) Anderson, Tina Anderson, Helle (Katherine) Anderson. He is preceded in death by his father Ralph, mother Erla, and brothers Tom and Jim. The family has chosen to postpone internment of his cremains to a later date. In lieu of flowers, the family requests that any contributions and/or acknowledgements be made to the Michael Anderson Benefit in care of his sons at PO BOX 30086, Des Moines, IA 50310. Please see the service and visitation information below. You will be entering a Military base and they will ID you at the entrance.

Michael Dean Anderson, 80, passed away from COVID-19 on Thursday, September 2, 2021 at Serenity House Hospice in Oskaloosa, Iowa where he had been a resident of Crystal Heights Care Center in recent years. Mike was born in Des Moines on June... View Obituary & Service Information

The family of Michael Dean Anderson created this Life Tributes page to make it easy to share your memories.

Michael Dean Anderson, 80, passed away from COVID-19 on Thursday,...

Send flowers to the Anderson family.