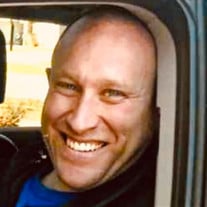 Matthew "Matt" Christopher Knapp West Des Moines, Iowa. On Friday, October 19, 2018 Matthew “Matt” Christopher Knapp, beloved father and son passed away. Matthew was born May 21, 1982 in Des Moines, IA to Chris and Amy Knapp. He grew up in Redfield, IA, attending Dexfield School and graduating from West Central Valley High School. After High School he joined the Army National Guard, where he was called to serve after 9/11. He later received his Bachelor Degree from William Penn University. Matt LOVED his 2 Children more than anything. Their favorite thing to do was Wrestle. They just enjoyed spending time together doing any of the kids activities. Matthew was an avid sports fan, knowing player and team stats by heart. His favorite teams being Chicago Cubs, Oklahoma Sooners and Minnesota Vikings. Matt worked as a Project Manager for several companies, currently PMI. Matthew is proceeded in death by his grandparents, Kenneth & Jean Sapp and Great Uncle Charles Wright. He is survived by his girlfriend, Kara Breen, his children Braxton and Kinley, his parents Chris and Amy Knapp, his grandparents George and Judy Knapp, his Great Aunt Helen Doris Wright and several cousins and uncle. Memorials may be given for the benefit of Matt’s children and may be left at the West Des Moines Christian Church. A Celebration of life gathering will take place 5 PM to 7 PM Thursday, October 25 at the West Des Moines Christian Church. A Celebration of life service will be 7 PM Thursday, October 25, 2018 at the West Des Moines Christian Church. A private burial will take place at the Iowa Veterans Cemetery in Adel, Iowa. All floral deliveries may be made to the West Des Moines Christian church on Thursday, October 25, 2018.

The family of Matthew Christopher Knapp created this Life Tributes page to make it easy to share your memories.

Send flowers to the Knapp family.