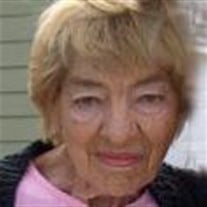 Mary Louise Pickard of Des Moines, IA, passed away peacefully on Wednesday, February 7, 2018. She was born August 18, 1937 to her parents Mabel McCaslen and Harry Helm in Winterset, IA. Mary, affectionately known as “Granny,” enjoyed spending time with her grandchildren. She enjoyed the outdoors on her patio relaxing and watching Soap Operas, WWE Wrestling, and the Atlanta Braves. She also loved gardening and crafting. She was consistently working on large puzzles and framing them. Mary is survived by her daughter, Shelly (Adam) Breeden and her children Nick (Christina) Palmer, Sammi (Josh) Ladd, Myah (David) Stubblefield, Darrion (Michael) Leftwich, Danny and Callie Breeden; her son Garry (Robin) Pickard and their children, Riley (Nick) Fazio and Taylor Pickard; her son, George “Lynn” and his children Alex and Charlie Nissen-Pickard and their mother, Stacee Nissen; her great grandchildren, Mavis Palmer, Evelyn Ladd, Layne Fazio, and Elena Orellana. She is preceded in death by her oldest son, Micheal. A private family service will be held. Memorial contributions may be made to the family, in loving memory of, Mary “Granny.” On-Line condolences maybe made at Dyamondmemorial.com.

The family of Mary Louise Pickard created this Life Tributes page to make it easy to share your memories.

Send flowers to the Pickard family.