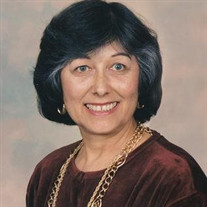 Mary (Liz) Park of Ankeny died June 16, 2014 at home following a very long fight with an autoimmune liver disease. She managed her disease and related medical issues with grace and dignity. Her "can do" spirit served as a model for her family and friends and for many of the people she met during numerous hospital and care center stays. Liz was born on July 9, 1939 in San Diego, California to Charles and Anne MacManus. She grew up in Newport, Rhode Island and attended college in Honolulu, Hawaii. She later worked for North American Aviation in Long Beach, California where she met her husband of 51 years, Roy Park. They married on August 17, 1963 and had five children. Liz was an amazing, fun loving wife, mother, and grandmother caring deeply about her family and friends. She enjoyed her part time work at the Ankeny Public Library. She loved quilting, antiquing, shopping and gardening. Her greatest joys were her grandchildren and spending time with family and friends. Left to cherish her memory are her husband Roy; five children and ten grandchildren: Dawn Donegan and her girls Allie and Tori of Cleveland, OH; Greg Park of Arcata, CA; Lori (Rick) Bratrud of Johnston, IA and their boys Alex Wagner of Austin, TX and Max Bratrud of Fort Collins, CO, Steve (Diane) Park and their children Destiny, Serenity, Jake and Ethan of Andover, MN; Cliff (Amy) Park and their girls Devin and Riley of Carlsbad, CA, her sister Suzanne Reeves, brother Richard MacManus, sister-in-law Mary MacManus and many nieces and nephews. Liz was preceded in death by her mother Anne Hunter, her step-father Howard S. Reeves and her dear brother Patrick MacManus. The family would like to thank all of those who loved and cared for Liz. Their support gave her reason to continue on and to make a difference. Visitation will be held on June 18, 2014 from 5:00 to 7:00 p.m. Services will be held on June 19, 2014 at 11:00 a.m. Both will be held at OLIH Catholic Church in Ankeny, IA. Private burial will be held at a later date. In lieu of flowers, please consider becoming a blood and organ donor.

Mary (Liz) Park of Ankeny died June 16, 2014 at home following a very long fight with an autoimmune liver disease. She managed her disease and related medical issues with grace and dignity. Her "can do" spirit served as a model for her family... View Obituary & Service Information

The family of Mary (Liz) Park created this Life Tributes page to make it easy to share your memories.

Send flowers to the Park family.