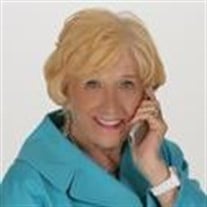 Margaret McRoberts Hull Jackson was born January 2, 1930 and passed into her next life at her beloved home on March 8, 2017 surrounded by her girls. She was a life-long resident of Des Moines. She loved her life, family, friends and clients. Whatever she set her sights on, there was no quit in her. She was a competitor, and it has been said more than once, "She was a force of nature and a pioneer." Marg was a proud graduate of Roosevelt H.S. and the University of Iowa. As a member of the Chi Omega Sorority she served as president for two consecutive years. In 1953 Margaret married Dick (Moe) Hull. Together they built two houses and danced their way through 25 years of marriage. Most importantly, they raised three daughters whom were their life's work. Marg was an advocate for her girls and so it's no surprise she became a life-long advocate for women. Marg was a born worker, and engaged in many fun and unusual jobs, often enlisting her friends in her work ventures. Marg also served on the board of the local Planned Parenthood and in 1965 was Volunteer of the Year for the Child Guidance Center. During summers, Marg ran a swimming lesson business and taught more than 60 children a day. The business operated for 26 years and she inspired many to participate in competitive swimming. Throughout her life she would often encounter people who eagerly recalled their swimming lesson experiences. It is estimated that hundreds of kids learned the "Marg Hull way!" Marg found her true calling when she began selling real estate in 1972 and became one of the first women to find success in the industry. After her first year of selling, Marg was honored as a multi-million dollar agent. She earned a spot on the Des Moines Board of Realtors' Million Dollar Club nearly every year. In the late 1970's, one of Marg's proudest moments was the opening of her all-female firm Universal Realty on Ingersoll. Marg loved to celebrate her frequent successes with her friends at Jesse's Embers. In the mid 80's Marg joined Iowa Realty and in recent years continued to find great success with her business partner and daughter, Holly Craiger. Together they were able to post Marg's biggest year ever, capping off an amazing 45-year career. Marg loved the thrill of making the deal and doing "right" by her clients. She never retired. Along the way, Marg found love with Victor Jackson and they married in 1987. Marg and Vic had a wonderful life together renovating their home, traveling and indulging their springer spaniel, Daizy Mae. Marg also was passionate about politics and over the years changed parties to support human rights that she firmly believed in. She was one of the first female members of DMG&CC. Marg was a shrewd card player and enjoyed pitch and bridge for many decades. Marg is survived by her three daughters: Holly Craiger (Fritz), Stacy Brenton (Stuart Johnson), Carey Witmer (Scott), her beloved brother John McRoberts (Susan), eight grandchildren: Ashley, Brittany and Clayton Craiger, C. Evan (Mary) and Nealy Brenton, Kendall, Emmett and Hayden Witmer, several nieces and nephews, and many, many friends. She was preceded in death by her parents Henry D. and Hazel McRoberts, and her husbands Victor Jackson and Richard T. Hull. Join us in celebrating Marg's life on Sunday, March 19th at 2:00 pm at Plymouth Church, followed by an "Open House" at the Wakonda Club. In lieu of flowers, memorials may be given to; Planned Parenthood of the Heartland, or Friends of DSM Parks - for swim lesson scholarships. Flowers may be delivered to Plymouth Church or Wakonda Club.

Margaret McRoberts Hull Jackson was born January 2, 1930 and passed into her next life at her beloved home on March 8, 2017 surrounded by her girls. She was a life-long resident of Des Moines. She loved her life, family, friends and clients.... View Obituary & Service Information

The family of Margaret McRoberts Hull Jackson created this Life Tributes page to make it easy to share your memories.

Send flowers to the Jackson family.