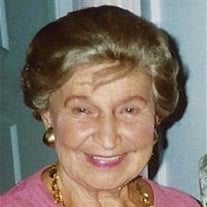 Malvina Agnes (Latvis) Mogan, 97, of Ankeny, Iowa formerly of Nashua, New Hampshire, Dover, Delaware, and Laurinburg, North Carolina. Malvina Agnes (Latvis) Mogan passed away in Des Moines, Iowa on October 17, 2014 of natural causes. She was born April 20, 1917 to Alexander and Agnes (Molis) Latvis in Nashua, New Hampshire. She graduated from Nashua High School and from nursing school at Memorial Hospital in Nashua to become a registered nurse. She served her country overseas during WWII as a U.S. Army Nurse. Her separation date from the military was February 17, 1946 as a 2nd Lieutenant. In 1948, she married John P. Mogan who had been an army hospital patient of hers in California. They had one child Janice. Returning to civilian life, Malvina assisted Dr. Charles Umpa in his private practice in Nashua, New Hampshire, then in 1954, moved to Norwood, Massachusetts where the family lived until 1979. There, she was employed for several years by Norwood Hospital. With her husband she moved to Dover, Delaware, and in 1988 moved to Laurinburg, North Carolina to be closer to grandchildren. It was after her husband passed away in 1994, that she relocated to Ankeny, Iowa in 2010. Malvina was devoted to her family. In addition, she cared for her parents, siblings, nieces and nephews. She was active in many community service projects, and always available to help neighbors. She will be remembered as kind and generous, and is loved by many. Malvina is predeceased by her parents, Alexander and Agnes Latvis; her husband John Patrick Mogan; her sister Agnes Latvis Wallace and brother-in-law Roger Wallace; and her brother William Latvis and sister-in-law Helen Latvis. She is survived by her daughter; Janice P. Mogan King and son-in-law Timothy B. King of Ankeny, Iowa; her grandchildren Jennifer King of Marshfield, Wisconsin and Jonathan King of Tunnel City, Wisconsin; her brother John Latvis and sister-in-law Maida Latvis of Nashua; and many nieces and nephews. Visiting hours will be 3:00 - 7:00 p.m. Sunday, November 9, 2014 at the Zis-Sweeney Funeral Home, 26 Kinsley Street, Nashua, New Hampshire. A mass of Christian burial will be 10:00 a.m. Monday, November 10, 2014 in St. Christopher Church, 62 Manchester Street, Nashua. Interment with military honors will follow in Holy Cross Cemetery, Hudson, New Hampshire. Zis-Sweeney Funeral Home in Nashua is caring for Malvina and her family. To share a memory or to offer condolences please visit www.zissweeneyfuneralhome.com In lieu of flowers, donations may be sent in Malvina’s memory to the Wounded Warrior Project, or a charity or your choice.

The family of Malvina Agnes Mogan created this Life Tributes page to make it easy to share your memories.

Send flowers to the Mogan family.