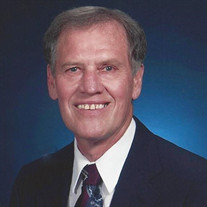 LaVern "Vern" Joseph Balk, 75, passed away December 11, 2016.  Vern was born at home on his family's farm near Waucoma, Iowa.  He was the middle of nine children born to Herman and Madonna (Finnegan) Balk.   After high school graduation, Vern joined the United States Navy where he was stationed in Japan, Hawaii, and California.  He then attended the University of Northern Iowa where he graduated with a degree in business and marketing and met his wife of 50 years, Jeanne Graff. Vern and Jeanne settled in Ankeny, Iowa, and to this union three children were born.  Vern worked at the Principal Financial Group for 37 years.  He was a 4th degree member of the Knights of Columbus and an avid sports fan.  Vern loved his family, taking annual road trips to visit relatives.  He will always be remembered for his welcoming personality, his frequent inquiries regarding the dating status for those yet unbetrothed, and his competitive whooping and hollering while routing any young nephew or grandchild in ping-pong, pool, or basketball.  He was a good dancer, kept a meticulous lawn, proudly showcased his family photo albums, and always took the grandkids to the park.   Vern was preceded in death by his parents, brother Mark, sister Barbara Newton, and brother-in-law Bill Newton.  He is survived by his wife, Jeanne, children: Steve (Angie), Julie (Brian) Wiltshire, and Sherri (Adrian) Garza, 11 grandchildren: Evan, Amelia, Clarissa, & Kyle Balk, Owen & Landon Wiltshire, Scarlett, Drake, Bridget, Luke & Jack Garza, siblings: Madonna (Dave) Baker, Jimmy (Cathy) Balk, Marie (Irvin) Blong, Charlie (Diane) Balk, Delores (Dennis) Puffer, Judy (Bill) Melcher, sister-in-law Janice Balk, and many nieces and nephews.  Memorial contributions will be used for Mass intentions for Vern or given to OLIH's Knights of Columbus.

LaVern "Vern" Joseph Balk, 75, passed away December 11, 2016.  Vern was born at home on his family's farm near Waucoma, Iowa.  He was the middle of nine children born to Herman and Madonna (Finnegan) Balk.   After high school graduation,... View Obituary & Service Information

The family of Mr. LaVern "Vern" Balk created this Life Tributes page to make it easy to share your memories.

Send flowers to the Balk family.