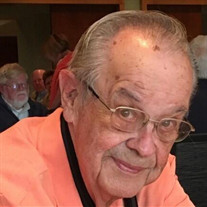 Born in Clearfield, Iowa on August 1st, 1926, to William Scarpino and Pearl L. House; Ken passed away peacefully on October 31st, 2020 at Veterans Medical Center in Des Moines, Iowa. He was 94 years old. Ken was a U.S. Navy Veteran of WWII and the Korean War. As a lifelong Des Moines resident, he touched many lives and had a variety of careers from Commercial Photographer with the Register and Tribune to night club and restaurant owner at his namesake "Scarpino’s." He enjoyed his photography and produced many skyline photographs that still hang in many of Des Moines’ most popular establishments. He was without a doubt a colorful thread in the fabric of Des Moines throughout his lifetime. More often than not, his parting words were a reminder to "be brave" - a sentiment he took with him as he reached his final days. He will be dearly missed by those who had the privilege of knowing and loving him. Ken was preceded in death by his parents, William & Pearl; wife, Sally; brothers, Bill & Ed; and one step-great-grandchild. He is survived by his eight children, Donna (Chuck) Ray, Ken Jr. (Brenda) Scarpino, Linda (Chuck) Miller, Gina (Tim) Duffy, Marty (Deena Edelstein) Scarpino, Dan (Sherry) Scarpino, Mike (Teri Byers-Spillman) Scarpino, Joe (Theresa) Scarpino; brother, Larry (Sue) Scarpino; seven grandchildren, Michelle Johnson, Haley Scarpino, Natalie Scarpino, Angela Hughes, Amy Duffy, Matt Duffy, Emily Duffy; five step-grandchildren, Kerri Fitzgerald, Kady Duffy, Dustin Brown, Sara Brommel, Stephanie Larson; three great-grandchildren and eighteen step-great-grandchildren; and many nieces and nephews. Visitation services will be held on November 9th from 3:00pm to 5:00pm at St. Ambrose Cathedral in Des Moines, Iowa; recitation of the Rosary will follow at 5:00pm. A mass of Christian burial will be held on Tuesday, November 10th at 10:00am at St. Ambrose Cathedral in Des Moines, Iowa; and, a burial service will be held at the Veterans Cemetery in Van Meter on Friday, November 13th at 9:30am In lieu of flowers, donations may be made to the Des Moines Animal Rescue League, Des Moines Historical Society or St. Ambrose Cathedral. We will be following the CDC guidelines. Please wear a mask and social distance accordingly. Thank you. Flowers may be delivered to the church on Monday, November 9th The 5pm Rosary Monday and 10am Mass on Tuesday will be live streamed on Dyamond Memorial's Facebook page.

The family of Ken Scarpino created this Life Tributes page to make it easy to share your memories.

Send flowers to the Scarpino family.