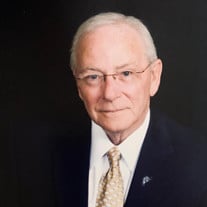 John Frederick Moller, Sr., 75, of Johnston, Iowa, passed away unexpectedly on Sunday, June 20, 2021 as he celebrated a special Father’s Day surrounded by his family. He was born on December 28, 1945 to Ira and Lucille (Hamilton) Moller at Still Hospital in Des Moines. John grew up as a proud “East Sider” and attended East High School before graduating as a Captain from Kemper Military School in Booneville, Missouri. John is well-known in the Des Moines area not only for his generosity and selflessness but also for his 50-plus years of service in the funeral industry. Following in his grandfather, Lee Hamilton’s footsteps, as well as his father’s footsteps, he became a third-generation co-owner of Hamilton’s Funeral Homes along with his brother, Bill Moller. Through the years, John served his client families with respect, dignity and grace, providing them with confidence to ensure their every need was met. With the occasional humor thrown in, he soon found himself getting to know families well, as they continued to ask for him when their loved ones died. His passion for the funeral industry as well as caring for the people of Des Moines and surrounding areas is proudly carried on by his son and daughter-in-law, Johnny and Debra, and his daughter, Jaime, who will continue to honor his legacy and well-respected reputation. In 1970, John and his wife, Linda, had a daughter, Joan Michelle. In 1973, they welcomed a son, John Jr. into their Beaverdale home. In 1987, John met Judy Johnson and together they blended their families to include the addition of a son, Brad and a daughter, Jaime. In 2003, John and Judy wed and their family grew to include their children’s spouses, 13 grandchildren and 2 great-grandchildren Aside from helping his family with their needs, John made numerous friends over the years as he loved talking to people whether it was with his coffee club at HyVee in Johnston, a glass of red wine with his friends at Greenbriar or attending a train or a gun show. John’s passion for trains soon grew into an entire room where he loved showing his grandkids how the trains ran and the newest car he had added to his collection. In addition, John was a member of many lodges, organizations and groups – too many to name – but most recently was proud of his membership with Lionel Collectors Club of America. Throughout his 75 years, John was known as a kind and incredibly warm gentleman who helped anyone that needed him. He lit up the room with his smile and personality and wanted to make sure everyone around him was happy. He loved his golden retrievers and enjoyed helping transport rescue goldens in his retirement years. John was a wonderful husband, father, grandfather, great-grandfather, and friend. He spoiled everyone with his quick wit, charm and love and cherished the opportunities he had to tell a joke, offer advice or simply smile from cheek to cheek to let everyone know it would be okay. The relationships he developed with each of his family members and friends will be cherished memories as we remember the effect he had on each of us. How blessed you were if you knew John. John is survived by his wife, Judy, who lovingly cared for him; daughters, Joani (Jeff) of Grimes, IA; Jaime (John) of Altoona, IA; sons, Johnny (Debra) of Ankeny, IA; Brad (Karyn) of Des Moines; grandchildren, Jenna (Gustavo), Michael, Macey, Mason (Shelby), Brea, Cameron, Kaleb, Macalister, Josie, Maesi, Maddie, Sophie and John Michael; great-grandchildren, Noah and Luca; sister, Norma Lee of Scottsdale, AZ; and brother, Bill of West Des Moines IA; along with many other nieces and nephews. We would be remiss not to mention his beloved dog, Greta, who stayed by his side day and night and will greatly miss him. In addition to his parents, John was preceded in death by his in-laws, Bob and Norma Jeane Schmeling, brothers-in-law, Mike Schmeling and Al Bush; sister-in-law, Jayne Sullivan. A Celebration of John’s life will be on Friday, June 25, 2021 from 4:00 p.m. – 7:00 p.m. immediately followed by a time in which we encourage friends and family to share stories honoring John at West Des Moines Christian Church, 4501 Mills Civic Pkwy, West Des Moines. Funeral services will be held at 1 PM Saturday, June 26, 2021 at the church with burial to follow at Masonic Cemetery in Des Moines. Condolences may be expressed at DyamondMemorial.com. In lieu of flowers, memorial contributions can be directed to either AHeinz57 Pet Rescue & Transport (4002 Ash Street, De Soto, IA 50069) or Doug Flutie Jr. Foundation for Autism (PO Box 2157, Farmington, MA 01703). All floral deliveries may be made to the West Des Moines Christian Church, 4501 Mills Civic Pkwy, West Des Moines, Iowa. Live stream the service on Saturday at https://www.wdmcc.org

John Frederick Moller, Sr., 75, of Johnston, Iowa, passed away unexpectedly on Sunday, June 20, 2021 as he celebrated a special Father&#8217;s Day surrounded by his family. He was born on December 28, 1945 to Ira and Lucille (Hamilton) Moller... View Obituary & Service Information

The family of John Frederick Moller Sr. created this Life Tributes page to make it easy to share your memories.

Send flowers to the Moller family.