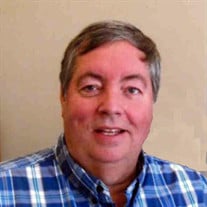 John Massey, 71 passed away on March 17, 2021 of complications from emergency heart surgery. He was born August 22, 1949 to Jack and Dorothy Massey and is a lifelong Des Moines resident. He graduated from Roosevelt High School in 1968. He was a talented, self-taught auto body repairman and also an auto mechanic. He had a ’55 Chevy and a ’66 GTO as a teenager and several other vintage cars later on including a Corvette and a Porsche. He loved working on them and racing them. He passed his knowledge on to his brother, his nephew and several of his friends. He worked at Massey Ferguson, Maytag and other plants as a production spray painter and at UTC Aerospace as an aeronautics jet nozzle repairman. He also had an antique and mirror re-silvering business with his wife. He was married to his loving wife, Charlotte (Char) for 48 years. They had a wonderful life together. He was an avid sportsman and he and Char travelled the country hunting and fishing. He was an easy-going, big-hearted guy with a contagious smile. A lot of his friends came to him for advice and trusted him so much they called him “Honest John”. He enjoyed visiting with his friends at the WDM Senior Center where Char volunteered. He is survived by his devoted wife Charlotte; his brother, Robert Massey (Shelley) of Des Moines; sisters, Margie Wilkinson, Des Moines, Susie Brodie (Todd) of Des Moines and Kim Morano (Al) of Des Moines; sister-in-law, Kathy Turner (Gary) of Siloam Springs, AR; brother-in-law, Gary Hodges of Indianola; 14 nieces and nephews and 16 great-nieces and nephews as well as many other family members and friends who will greatly miss him. He is preceded in death by his parents, Jack and Dorothy Massey; paternal grandparents, Walter and Margaret Massey; maternal grandparents, Jim and Rose Rogers; father-in-law, Don Thomas; mother-in-law, Katy Thomas; brother-in-law, Don Thomas Jr. and a sister-in-law Candy Hodges. Celebration of John's life will be 2pm Wednesday, March 24, 2021 at Merle Hay Funeral Home, 4400 Merle Hay Rd., Des Moines, Ia. 50310. Visitation with family will begin at 1 pm at the funeral home. Masks will be required at the funeral home. John wished to be cremated so he could ALWAYS be with Char. In lieu of flowers, memorial contributions may be made to The Michael J. Fox Foundation for Parkinson’s disease. Online condolences: DyamondMemorial.com

John Massey, 71 passed away on March 17, 2021 of complications from emergency heart surgery. He was born August 22, 1949 to Jack and Dorothy Massey and is a lifelong Des Moines resident. He graduated from Roosevelt High School in 1968.... View Obituary & Service Information

The family of John Stephen Massey created this Life Tributes page to make it easy to share your memories.

Send flowers to the Massey family.