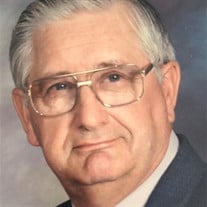 Jerold Johnson, 87, passed away January 16, 2021 at Sunnyview Nursing Home in Ankeny, Iowa with his family by his side. He was born October 1, 1933 in Story City, Iowa, the son of Milford and Jeanette (Hauge) Johnson. He graduated from Ankeny High School and married his high school sweetheart, Elizabeth (Robinson) Johnson on April 17, 1954. They celebrated 65 years of marriage in 2019. The couple began married life farming in Polk City, Iowa. They then moved to Detroit, MI while Jerold served in the military. After the military, they moved back to the Ankeny area where they farmed and raised their family. He also served many years as a board member for PCA, which was part of the government sponsored farm credit system. Jerold had a secondary business and was known as the “HandleMan”. His motto was,”We can handle most anything,” and he did. Jerold enjoyed fixing broken tools for friends, area farmers and landscapers. After retiring from farming, he still fixed tools and worked part-time for Pioneer (Dupont). Jerold and Liz enjoyed traveling. They were active church members. They were devoted Parents and Grandparents. They loved to attend their grandchildren’s activities. Jerold was a collector. He attended many auctions and garage sales. He was an Iowa State Cyclones fan where he had attended college. Jerold was a friend to many. He loved to visit and tell stories. He will be missed. Jerold is survived by his daughter, Diane (Lee) Hacker; two grandchildren; Luke Hacker and Megan (Joe) Bedford; and two great-grandchildren, Taylor and Brooke Bedford. Two Brothers; Merle (Susan) Johnson and Allen (Marva) Johnson of Ankeny and two sisters; Verdel Odgaard of Ankeny and Janet (Jim) Longcor of Des Moines, and many nieces and nephews. He was preceded in death by his parents, wife (Liz 2019), son (David 2020) and older brother Duane. Memorial donations may be made to Suncrest Hospice, 5959 Village View Dr Suite #100, West Des Moines, IA 50266.

Jerold Johnson, 87, passed away January 16, 2021 at Sunnyview Nursing Home in Ankeny, Iowa with his family by his side. He was born October 1, 1933 in Story City, Iowa, the son of Milford and Jeanette (Hauge) Johnson. He graduated from Ankeny... View Obituary & Service Information

The family of Jerold Johnson created this Life Tributes page to make it easy to share your memories.

Send flowers to the Johnson family.