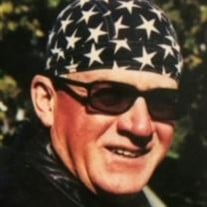 James “Jim” Smiley 74, passed from this life due to heart failure, on November 12, 2020 at his home in Ankeny, Iowa. He was proud to say he survived the ravages of “behavioral variant” Frontotemporal Degeneration (FTD) for two decades. The loss of riding his beloved Harley was the greatest sadness of his life. Thanks to the support from Suncrest Hospice and especially, Brie, Jim was able to pass in his “Harley Room” at his own home. Jim is survived by his loving wife of 53 years, Wanette; daughters, Michelle Hamilton, Jill East and Darcy (Kevin) Baysinger; 8 grandchildren; his sister, Jo Roberts; and other survivors include his birth family , brother, Bob and sister, Bev. He was preceded in death by his loving parents, Bob and June Smiley; and birth parents, Elenora and Raymond; and brother, Curtis. Private Memorial Service will happen at a later date. Memorials may be made to the family c/o Dyamond Memorial 121 SW 3rd Street, Ankeny, Iowa 50023. My Last Ride My hands are clenched around chrome bars the engine’s rumble sounds so sweet. I twist the throttle with my palm and roar off down the street. The slapping of my leathers and raging winds on either side, drum a beat of sweet contentment as I ride this ….. my last ride. Alone on my tin pony, to the heavens I’ve been called, but fret not my dear loved ones, I’m not lonely here at all. The speedometer is just a blur as tears blow from my eyes, the bike and I roll forward off into the calling skies. I hope I touched your lives one day, and left a treasured mark, now I’ll ride on to FOREVER, with your memory in my heart. By Frank Clark

The family of James Smiley created this Life Tributes page to make it easy to share your memories.

James “Jim” Smiley 74, passed from this life due to heart failure,...

Send flowers to the Smiley family.