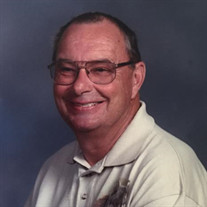 James Woldy Haugen, 74, of Granger, Iowa, passed away peacefully at his home surrounded by family and friends on April 9, 2016. He was born on December 30, 1941 to Conrad and Alice (Woldy) Haugen of St. James, Minnesota. He was involved in football and track and lettered all four years in high school. After high school, Jim proudly served in the US Army during the Vietnam War. After his service, Jim attended North Dakota State College of Science in Wahpeton, North Dakota, also played football there, and graduated from the auto body instruction program. He received his Bachelor’s Degree in Teaching from Bemidji State University in Bemidji, Minnesota. Jim taught Auto Body Technology at the Northwest Technical College in Bemidji, Minnesota for 27 years. Jim married the love of his life, Elaine (Clark), August 26, 1967. During their life together, they have called Bismarck, North Dakota; Bemidji, Minnesota; and Granger, Iowa their home. He enjoyed drag racing, fishing, camping, collecting hats, and telling stories with family and friends. He never missed his children’s activities when they were growing up and enjoyed going to his grand children’s activities as well. After retirement, he loved to drive around visiting people he knew and telling stories and making them laugh. Jim was very proud and deeply loved by his children, Christy Johnston and Greg Haugen (Marie). He will forever be cherished by his grandchildren; Christian and Jackie Royston, and Martha, Genevieve, and Brigitta Haugen. Visitation will be Wednesday, April 13, at the Polk City United Methodist Church (1421 West Broadway, Polk City, Iowa) from 4pm to 6:30pm. The funeral service will be held the following day at the church at 10:30, with lunch to follow. All floral deliveries may be made to the church on Wednesday.

James Woldy Haugen, 74, of Granger, Iowa, passed away peacefully at his home surrounded by family and friends on April 9, 2016. He was born on December 30, 1941 to Conrad and Alice (Woldy) Haugen of St. James, Minnesota. He was involved in... View Obituary & Service Information

The family of James Woldy Haugen created this Life Tributes page to make it easy to share your memories.

Send flowers to the Haugen family.