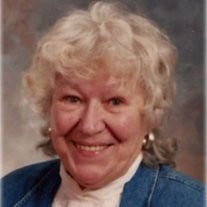 Irene Schlundt passed away peacefully on Monday, November 25, 2013 in Ankeny, IA with family by her side. A Celebration of Life will be 11:30 a.m. Saturday, April 5, 2014 at The First Presbyterian Church of East Moline (777 25th Avenue East Moline, Illinois 61244). A luncheon will follow at 1:00pm at Friends Circle Club (701 18th Avenue Moline, Illinois 61265). Irene (“Bobbie” to her grandchildren) was born December 28, 1921 in Chicago, IL, the first child born in America to Vincent and Isabella Cieslinski who had emigrated from Poland. After graduating from Kelly High School, Irene and her best friend Val enlisted in the United States Marine Corp. She served during WW II from 1944- 1945. In 1947 she met Kenneth Schlundt (her “Rock”) in Michigan City, IN and they were married September 4, 1948. They then moved to Moline, IL where Ken worked for John Deere and Co., and they raised their family. Irene and Ken were members of the First Presbyterian Church of East Moline, IL for over 50 years. They also traveled the world, living in Madrid Spain for two years. Irene’s favorite city was Venice, Italy. Irene (Bobbie) is best described as a “Free Spirit” who always saw the best in everyone and rooted for the underdog. She always believed that people were doing the very best they could. She loved her family with all her heart and made everyone feel like they were the most important person in the world. She found contentment in life and appreciated all of her blessings. Irene had a green thumb, was an avid reader, an artist and had an eclectic style. A day will not go by that her influence will not be felt. She is preceded in death by her parents; her brother Kasmer; her sisters, Jo, Betty, and Lil; and her husband, Kenneth, in 2006. She is survived by her daughter Sherry Schlundt (Michael Lundquist) Ankeny, IA; sons Al (Terri) Schlundt of Montgomery, AL; and Kent (Robin) Schlundt of Thornton, CO; grandchildren; Sam, Noah, Chloe’ and Grace Lundquist, Walker, Walden (Karisa), and Westley Schlundt, Emma (Josh Schenkel) and Maggie and Hope Schlundt ; her great grand-daughter Edith Schlundt; and sister-in law Dorothy Johnson of Michigan City, IN. Memorial Contributions may be directed to the family for a future tribute in Irene’s Honor or a contribution can be made to a charity of choice in her name. Dyamond Memorial Funeral and Cremation Services are caring for Irene and her family.

Irene Schlundt passed away peacefully on Monday, November 25, 2013 in Ankeny, IA with family by her side. A Celebration of Life will be 11:30 a.m. Saturday, April 5, 2014 at The First Presbyterian Church of East Moline (777 25th Avenue... View Obituary & Service Information

The family of Irene Schlundt created this Life Tributes page to make it easy to share your memories.

Send flowers to the Schlundt family.