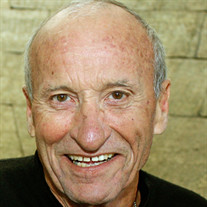 Gary E. Miller passed away on Friday, May 29, 2015 in Rochester, Minnesota from complications of a lung infection. Mass of Christian Burial will be held at 10:00 AM, Saturday, June 6, 2015 at All Saints Catholic Church, 650 N.E. 52 Ave in Des Moines. A visitation with family present will be 4:00 PM – 6:30 PM, Friday, June 5, 2015 at the church, with a 6:30 PM Prayer Service. Gary was born on December 26, 1943 to Leslie (Pete) and Helen (Daniels) Miller in Greentop, Missouri. Gary grew up on the family farm with his parents and older brother. He attended Northeast Missouri State University earning a teaching degree and a Master’s in education administration. He worked for the Des Moines Public Schools as a coach, teacher, and administrator for the district’s driver education program, retiring in 2004 after 34 years. It would be safe to say that you can thank Gary for the thousands of good drivers in Des Moines. Everywhere he went someone was always coming up to him saying “Mr. Miller, I had you for Drivers Ed.” As most young teachers do when first starting out and raising a young family, Gary was always looking for ways to supplement his income. This led him to going to craft shows selling his latest creation and to opening Tasty Twirl Ice Cream shop at Valley West Mall. While on vacation in Arizona he stumbled upon a wonderful treat called shaved ice and pitched the idea to the vendor committee at the Iowa State Fair. In 1988 shaved ice started in Iowa at the fairgrounds, and for the last 26 years that’s where you would find Gary every August. He loved the fair, the people he met there, and all the girls who worked for him. All his daughters, his daughter-in-law and his granddaughters worked the booth. As one friend commented “God must have needed a shaved ice stand on the main concourse in heaven. Gary’s sitting in the back taking a break on his lawn chair sipping an ice cold one. He will be missed.” Gary is survived by his wife Stephanie (Stegman) Miller; his four children, Marcia (Bill) Kelly, Michael (Toni) Miller, Monica (Pat) Farrell, Melinda Miller; grandchildren, Katie, Sarah, Grace, and Will Kelly; Myles and Mitchell Miller; Elijah Farrell; Lila and Olive Meyer; brother Ron (Lenora) Miller. In lieu of flowers, memorial contributions may be directed to Animal Rescue League of Iowa, Pet-Project Midwest, DMARC Food Pantry, Hospice of Central Iowa or a charity of your choice.

Gary E. Miller passed away on Friday, May 29, 2015 in Rochester, Minnesota from complications of a lung infection. Mass of Christian Burial will be held at 10:00 AM, Saturday, June 6, 2015 at All Saints Catholic Church, 650 N.E. 52 Ave in Des... View Obituary & Service Information

The family of Gary E. Miller created this Life Tributes page to make it easy to share your memories.

Send flowers to the Miller family.