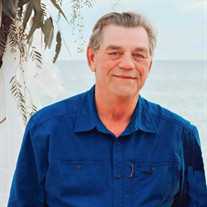 Eugene Frederick Mull Jr., “Jay”, 64, passed away unexpectedly on April 25, 2022. He was born February 19, 1958 in Perry, IA to Eugene Sr. and Marcella Mull. Throughout his childhood and teens, Eugene was known as “J.R.” by close family and with time became affectionately known as Jay. Jay served his country in the US Army and Iowa National Guard until his honorable discharge in 1999. He was a mechanic by trade, had a multitude of hobbies, such as making wine, gardening, cooking and grilling. Jay enjoyed live music often listening to his favorite blues bands, watching country westerns and indulging in a good book. In his younger and more adventurous years he would often be found enjoying the open road on his cherished Goldwing Motorcycle. Jay was a free spirit, but also enjoyed being at home spending time with family, his cat, Sonny, and his dog, Blue. He is survived by his wife of 40 years, Karen; daughters, Tiffany Wisdom, Jordan Mull, Mallory (Kody) Daniel, and Maria (Evan) Amparano; grandchildren, Gavyn and Gage Amparano, Hadley Daniel, Marlee Hall, Jude, Cierra, Dakota and Alex Baumgardner; siblings, Raegene Mull, Christine(Tim) Hall, Dustin (Kelly) Mull, and numerous other beloved family members. Jay was preceded in death by his parents, Eugene Sr. and Marcella Mull; sons, Matthew and Todd Baumgardner; granddaughter, Cheyenne Baumgardner. A Celebration of Life will be held on Friday, April 29, 2022 at 2:30 pm. The family welcomes all who want to remember Jay, and share in celebrating his life.

The family of Eugene Frederick Mull Jr. "Jay" created this Life Tributes page to make it easy to share your memories.