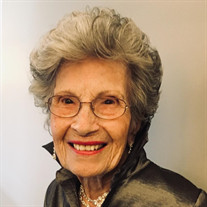 Our angel was born on June 12th, 1919 in the Guthrie Center farmhouse of her parents, Edward Harrison Titus and Nancy Etter Christian. It was a surprise to her mother, Nancy when Elzora's identical twin Elnora Fae followed minutes later. On February 14, 2020 Elzora passed away at her home. The twins loved their childhood on the farm but begged their father to send them to Madame Kennedy’s Beauty College in 1939. Elzora became an instructor at Iowa Beauty School where she met and married the owner, Harry Horner in 1944. They had three children together. When Harry died suddenly in 1967 Elzora took charge and ran the Beauty School. After selling the business in 1973 she worked at Mr. Executive Salon until she retired in 1986. Elzora married James Wangemann on Valentine’s Day 1976. She passed away Saturday, February 14th on their 44th wedding anniversary. Ellie Mae was an eternal optimist, perpetually positive, forever forgiving, loving, kind and non-judgmental. It seems fitting that Valentine’s Day would be so significant for her. She was an accomplished seamstress, public speaker, award winning ballroom dancer, and avid golfer, who routinely beat us at mini golf even at 100 years old! The last line of her memoirs gave us her final act of kindness, for she said..."Do not mourn for me for I have had a wonderful life!" There will never be another treasure like Elzora. She was preceded in death by her beloved twin sister, Elnora Wood, and her brothers, Harold and Max Titus. Left to sing her praises are her husband James; sons, Wyn Titus (Saunie), Bill Horner (Kathy), and Bob Horner, (Lori); daughter, Susan Horner; step-daughters Alex Sonnenberg (Stew), and Sherry Bettencourt (Louie); granddaughters, Jill Horner, Wendi Maresca, Robin Little, and Kourtney McComb (Jeremy); grandsons Jamie Horner, Mark Horner, and Jeff Horner (Sara); step-grandsons, Adam and McLean Sonnenberg; and her great grandchildren, Lexi, Paige, Grant, Drake, Jake, Knox and Ryker. A Celebration of Elzora’s Life will be 1 PM Saturday, February 29, 2020 at Merle Hay Funeral Chapel (4400 Merle Hay Road) with a reception following the service. A private burial will be at Resthaven Mausoleum. In lieu of flowers donations in her memory can be made to Furry Friends Refuge or to the ALS Association.

Our angel was born on June 12th, 1919 in the Guthrie Center farmhouse of her parents, Edward Harrison Titus and Nancy Etter Christian. It was a surprise to her mother, Nancy when Elzora's identical twin Elnora Fae followed minutes later. On... View Obituary & Service Information

The family of Elzora Mae (Horner) Wangemann created this Life Tributes page to make it easy to share your memories.