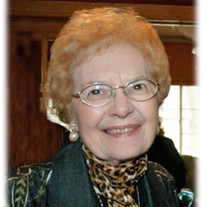 Edris Ann Shepherd Brugioni, 92, was born November 15, 1921 to William Kent Shepherd and Eletha Wilhite Shepherd on the Shepherd farm near Thornburg, Iowa. After Graduating from Gibson High School in 1939 Edris moved to Des Moines, to work. There she met Deno Brugioni, on October 2, 1940 they were united in marriage. They lived in Des Moines most of their married life with their only child, Dennis. Edris worked as a teller and savings counselor at American Federal Savings and Loan for 31 years, retiring in 1981. Edris and Deno toured Europe several times and visited several relatives of Deno’s father and mother. They also wintered in Texas for several years. Edris enjoyed music, dancing, antiques and her home. She loved her family and spoiling her grandchildren. She was a member of All Saints Catholic Church and the Rosary Society. Survivors include her son, Dennis (Carolyn) Brugioni; grandson, Ryan Brugioni, all of Ankeny. She was preceded in death by her husband, Deno Brugioni, her parents, grandson, Sean Christopher Brugioni; granddaughter, Lisa Ann Brugioni; her brothers, Robert H. Shepherd and William N. Shepherd and her sister Doris Clubb. Mass of Christian Burial will be held at 10:00 am, Wednesday, September 3, 2014 at All Saints Catholic Church, 650 NE 52nd Ave, Des Moines. Family will be available to visit with friends from 5-7 pm, Tuesday, September 2, 2014 at the church. Following the service burial will be at the Glendale Cemetery in Des Moines. Memorial Contributions may be made to All Saints Catholic Church in loving memory of Edris. Dyamond Memorial 515-964-7543

The family of Edris Ann Brugioni created this Life Tributes page to make it easy to share your memories.

Send flowers to the Brugioni family.