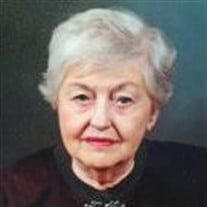 Edith Miriam "Mimi" Rushing Des Moines Edith Miriam "Mimi" Rushing was born in Savannah, Georgia on November 5, 1918 to Lamar and Julia (Terry) Thomas and she passed away peacefully in her sleep on October 6, 2015 at the Urbandale Health Care Center in Urbandale, Iowa. She retired from Bankers Life in 1983. She enjoyed spending time with family and friends as well as, playing the piano, dancing, singing, watching baseball, reading mystery and astrology books. Miriam is survived by her brother, Lamar Thomas of Daytona, Florida, her daughter Laura (Henry) Nentl; her grandchildren, Jenni (Carl) Seim of Leavenworth, Kansas, Meredith (Frank) Santiago, Robert (Amy) Nentl of Des Moines, Iowa, and Jonathan (Leah) Nentl of Oceanside, California; and four great grandchildren, as well as many nieces, nephews and cousins. She was preceded in death by her parents, Lamar and Julia (Terry) Thomas; her husband, Richard Rushing; and a sister, Nell Pitts. A Celebration of Life Service will be held 11:00 AM Friday, October 9, 2015 at Merle Hay Funeral Home, 4400 Merle Hay Road, Des Moines, Iowa. Friends may greet the family for one hour prior to services at the funeral home. Burial will be at 1PM at the Center Grove Cemetery in Cambridge, Iowa. Memorial contributions may be made to Wishes for Warriors, 31805 Temecula Pkwy Suite 139 Temecula, CA 92592 in loving memory of “Mimi”. All Floral Deliveries may be made to the Merle Hay Funeral Home.

The family of Edith Miriam "Mimi" Rushing created this Life Tributes page to make it easy to share your memories.

Send flowers to the Rushing family.