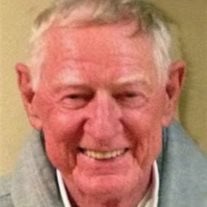 A memorial service celebrating the life of Earl R. Hamilton Jr., of Palm Coast, Florida will be held 2:00 p.m., on Saturday, March 15, 2014 at St. Mark by the Sea Lutheran Church. Mr. Hamilton was born in Lancaster, South Carolina and moved to this area from Hollywood, Florida in 2000. He served his country with honor as a member of the United States Army and was stationed in Germany. Mr. Hamilton, or "Sonny" as he was affectionately known, was a member of St. Thomas Episcopal Church, was an avid golfer, loved to travel, and most of all loved spending time with his family. Sonny was preceded in death by Christine, his wife of 56 years. He is survived by his son Earl R. Hamilton III and his daughter-in-law Bonnie, of Palm Coast; his daughter Linda Moller and her partner Jim Holcomb, of Urbandale, his brother Bruce Hamilton and his wife Margaret, of South Carolina; his sister Francis Bower and her husband Bill, of South Carolina, his sister Denear Darnell, of North Carolina; his sister Joan Matthews, of South Carolina; his grandchildren India Hamilton (his Angel), Johnny (Debra) Moller of Des Moines, and Joani (Jerry) Matalone; and his great-grand-children Josie (his Hurricane) and Sophie (his Sunshine) Matalone all of Johnston. The family suggests that in lieu of flowers donations can be given, in Sonny's name, to the brave men and women of the armed services via: Wounded Warrior Project, P.O. BOX 758517, Topeka, KS 66675. The family of Mr. Hamilton has entrusted the arrangements to Clymer Funeral Home & Cremations.

The family of Earl R. Hamilton Jr. created this Life Tributes page to make it easy to share your memories.

Send flowers to the Hamilton family.