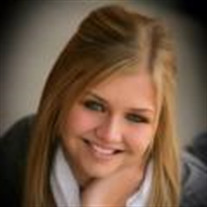 Dyamond Ott was born on April 25, 1993, in Des Moines and passed away at the age of 18, on the morning of December 11, 2011, at the University of Nebraska Hospitals in Omaha. There will be a Celebration Of Life Service at 2 p.m. Saturday, December 17, 2011, at Northview Middle School (formerly, Ankeny High School) 1302 North Ankeny Blvd., Ankeny. Friends may visit with family from 12 p.m. until service time, at the school. Dyamond is survived by her parents, Diane and David Ott; her sister, Dallas Ott; grandparents, Steve and Mary Field, and Doris and Don Ott; great-grandparents, Quentin and Dorothy Johnson; and many aunts, uncles, cousins, great-aunts and great-uncles who loved her dearly. She was preceded in death by her grandfather, Dave Johnson. In lieu of flowers, memorial contributions may be made to Veridian Credit Union for an Education Fund for Dallas Ott, Dyamond's sister. Dyamond Taylor Ott was born April 25, 1993 in Des Moines, Iowa to Diane and David Ott. She grew up in Ankeny and was a freshman in college. Dyamond's passion was dance. She was a part of the competition dance team at Nicole's School of Dance. She also loved spending time with Drew, her boyfriend of three years, hanging out with family and friends, going shopping and long foot rubs from her Unkie. She enjoyed family vacations and always looked forward to her yearly trip to Long Beach, CA. Dyamond was very luckily that she lived every day with her best friend, her younger sister Dallas. Dyamond was a strong willed, incredibly beautiful soul that inspired many with her amazing attitude. She touched everyone's heart by always keeping her head held high and a smile on her face as she lived each day to the fullest. Dyamond has had a very long journey. At the age of six she was diagnosed with a liver and a blood disease. Over the next 6 years, she had many tests and procedures done. However, she hadn't gone through this alone; her sister Dallas, at the age of two was diagnosed with the same liver disease. Dallas is now 14 years old and thankfully her disease isn't progressing as Dyamond's. When she was 12 years old, the transplant team at the Nebraska Medical Center in Omaha, NE evaluated her. They discovered she had developed a kidney disease. She needed both a liver and kidney transplant. At 12:05 a.m. on September 21, 2006, our phone rang and we were told that they had potential organs for her. She had very mixed feelings; Scared (major surgery-the unknown), Sad (knowing that a family had lost a loved one), Happy (I was getting a second chance at life), and Thankful (to the donor family). We got the confirmation call at 3:30 a.m. to head to Omaha; she would be receiving both liver and kidney from the same donor. One year after her transplants she had to have her spleen removed, as it was covered with pre-cancerous spots. She was lucky, as they caught it in time. Since then, they have been watching closely for PTLD (Post-Transplant Lymphoproliferative Disease) On January 14th 2011, she was diagnosed with a brain tumor. She had surgery on February 1st to remove most of the cancerous tumor. She then endured 30 treatments of brain and spine radiation. She completed the radiation treatment and was 6 months cancer free. November 26th 2011, she was diagnosed with PTLD (Post-Transplant Lymphoproliferative Disease). Her entire abdomen was full of cancer. She started chemo and two weeks later she lost her battle. She was fortunate enough to meet her donor family and learned that her donor was an 11 year-old boy named Jacob who was hit by a car on his way home from school. She was grateful and gave thanks everyday to her donor family for her 'Gift of Life' and wanted everyone to remember that 'Life is a Gift'. Jacob was her hero! Throughout all her years of health issues, she continued her studies as she was determined to graduate with her class. She even did two and a half years of her schoolwork at home with a tutor. In May 2011, she graduated from high school with her class. She planned on studying to become a Child Life Specialist and help sick kids from all her experiences. She enjoyed everyday to its fullest and always looked forward to everything that life had to offer. http://www.youtube.com/myangelfoundation click on Organ Donation - A Recipient's

Dyamond Ott was born on April 25, 1993, in Des Moines and passed away at the age of 18, on the morning of December 11, 2011, at the University of Nebraska Hospitals in Omaha. There will be a Celebration Of Life Service at 2 p.m. Saturday, December... View Obituary & Service Information

The family of Dyamond Taylor Ott created this Life Tributes page to make it easy to share your memories.

Send flowers to the Ott family.