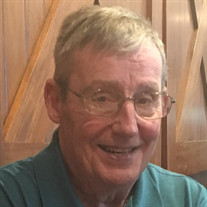 Douglas Edward Hastie, 71, of Ankeny and formerly of Perry, passed away unexpectedly Tuesday, May 21, 2019. Doug was born in Perry, Iowa on February 24, 1948 and graduated in 1966 from St. Patrick’s High School in Perry. He married Susan Ervin in 1967. Doug proudly served in the Iowa National Guard during the Vietnam War and was a firefighter for the city of Des Moines. In 1979 Doug joined his father farming in Perry before health reasons forced him to retire in 1986. He then went back to school and graduated from Iowa State University in 1990 in the top 3% of his graduating class. He was a social worker with the State Department of Human Services in Des Moines until his retirement. Doug and Lin Schultz were married June 28, 2006 in Ankeny. Doug always said that Lin was a saint. He was right. Doug was a master storyteller with quick wit and was proud of his family heritage. He also enjoyed gardening and in 1977 he set two Iowa State Fair records for squash (125 pounds) and watermelon (126 pounds). He was even featured in a live segment with Mary Jane O’Dell on the nightly State Fair show on Iowa Public Television. Doug was especially fond of camping in tents and was happiest in the early morning sunlight in Yellowstone National Park or at the Grand Canyon sitting on a picnic bench sipping a cup of coffee. He was a firm believer in family tradition, which will live on in his absence. He loved all of his family and they all knew they were abundantly loved. Doug's incredible work ethic, gentleness and sense of fairness will never be forgotten. Doug was preceded in death by his parents, Clifford and Eloise (Garrity) Hastie and his brother Gregory. He is survived by his sister Sharon (Jon) Larson of St. Charles, MO, wife Linette Hastie and stepchildren Chris (Augusta Brulla) Schultz, Jessica (Marty) Shaw and Katie Schultz. He is also survived by Susan Hastie of Des Moines and their son, Mike (Becky) Hastie of Indianola and daughter Deb (Wayne) Knisley of Urbandale and step-grandchildren Andrea, Alex and Abbie Shaw, Orion and Maddax Schultz along with grandchildren Luke, Lauren and Lexie Hastie of Indianola and bonus grandchildren Kaden and Logan Knisley of Urbandale No funeral services are planned. Private interment of cremains will be at Violet Hill Cemetery in Perry at a later date.

Douglas Edward Hastie, 71, of Ankeny and formerly of Perry, passed away unexpectedly Tuesday, May 21, 2019. Doug was born in Perry, Iowa on February 24, 1948 and graduated in 1966 from St. Patrick&#8217;s High School in Perry. He married Susan... View Obituary & Service Information

The family of Douglas Edward Hastie created this Life Tributes page to make it easy to share your memories.

Douglas Edward Hastie, 71, of Ankeny and formerly of Perry, passed...

Send flowers to the Hastie family.