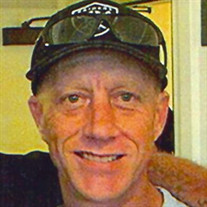 Douglas “Doug” Brookes was born November 4, 1960 in Des Moines to Donald and Mary (Ryan) Brookes. Doug passed away at age 55 surrounded by his family on Saturday, May 28, 2016 after a long hard fight against cancer. Doug grew up in Ankeny and graduated from Ankeny High School in 1979. After graduation Doug moved to Minnesota and was employed by School Districted #281. He returned to the Des Moines area and was most recently employed by Peterson Painting. Doug had a passion for music ranging from classical to Jimi Hendrix. But Doug believed the Rolling Stones are the greatest rock and roll band EVER!! He was a member of the Raider Nation! Doug was known for his great one-liners and his wicked sense of humor. Those cherishing Doug’s Memory are: his mom, Mary Brookes Trupp; son, Jacob Brookes; sisters, Tina (Mike) Barton, Christy Brookes and Missy Brookes Bohn and his brother, Jeff (Roberta) Brookes; granddaughter, Zionna Brookes; nephews, Chad Barton, Tyler Gustafson, Kyle Gustafson, Donnie Brookes and Josiah Brookes; his nieces, Jenifer Bohn Regan, Emily Gustafson, Faith Brookes and Sophia Brookes; great nieces, Ella Gustafson and Evie Gustafson. Doug was preceded in death by his dad, Donald Brookes and his step father, Harold Trupp. Honoring Doug’s request, he has been cremated and no services are planned. A private family memorial will be held at Laurel Hill Cemetery in Des Moines, Iowa. The family would like to say a very special Thank-You to Tonda Greene, the woman who brought love and happiness back into Doug’s life. Her unconditional love, support and care for Doug will forever keep her a member of Team Brookes! Team Brookes would also like to thank the following people for their care and compassion for Doug: Nurse “Chili Dog”, Mercy Home Care, Hope Lodge (a residence for people receiving cancer treatments) at Iowa City Hospitals, and Taylor Hospice House. Memorial Contributions can be made to Hope Lodge, 750 Hawkins Drive – Iowa City, Iowa 52246 or to the family at Dyamond Memorial, 121 SW 3rd Street – Ankeny, Iowa 50023.

The family of Mr. Douglas "Doug" Brookes created this Life Tributes page to make it easy to share your memories.

Send flowers to the Brookes family.