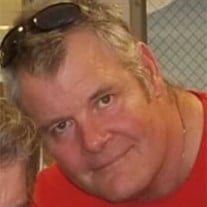 Doug Frederick, 64, was born February 23, 1956 to Bob & Jan Frederick. He died unexpectedly of cardiac arrest in an ambulance after calling 911 with shortness of breath and tightness in his chest on September 16, 2020 in Ankeny, Iowa. It was painless and swift, and he did not suffer. Doug was able to donate skin, tissue, veins, bones, and his corneas. Helpful and giving right to the end. Doug’s nickname was “JEEP”. He got the nickname from a pair of tennis shoes he had back in the day called Jeepers Creepers. The name stuck and eventually people started calling his little brother Don “Little JEEP”. Don still preferred “BIG FRED” even though Doug was the much bigger brother. Big in more than one way: he was tall, standing at 6’5’’, and everyone knows what a BIG voice he had to match his BIG personality, and his heart was the BIGGEST of all. Doug loved to eat. His mom used to joke that she had to set a 30-minute timer and when it went off he was done eating in her kitchen or else he would eat her out of house and home. He was a huge supporter of Ankeny, especially the local restaurants. In fact, he had his favorite tacos at The Clipper the night before he passed away. Doug loved all sports. He played football video games from the time he was a teenager until the day he died. He was an avid Green Bay Packers fan. When Doug was younger, he played on many softball teams. He made a host of friends playing ball. His favorite ball games were played with his 41 first cousins at the Cherry Glen Shelter grassy field every 4th of July for many years. Everyone wanted Doug on their team! He was content and happy in his last years after taking care of his beloved mom and dad until their deaths. He was a wonderful caregiver. Doug said, “I love you” to his “little ‘seesters”’ every signal time they talked to him. He will be missed by many. Doug is survived by his children, son, Troy Frederick; daughter, Angela Tipton; his siblings, Lori Ayala (Steve), Lysa (Bill) Youngquist; Leslie Frederick (Eric); nieces, Maria Ayala and Allyson & Janna Youngquist; nephews, John Vaughan (who took excellent care of Doug in his final months and was his daily companion); Nick Ayala, and Billy & Bobby Youngquist. He was preceded in death by, his fiancée, Tracey Caudill; parents, Bob & Jan Frederick; brother, Don Frederick, and nephew Josh Vaughan. Doug’s Celebration of Life is postponed due to cold weather. The service will be held at Lutheran Church of the Cross, 1701 8th Street SW, Altoona, Iowa and we will update the obituary when services have been finalized. He loved this church and the members of the congregation were so good to him. He found his peace with God there. Doug’s cremated remains will be buried by his mom and dad at Ankeny Memorial Garden Cemetery. Memorial Contributions will go towards a memorial bench at the Ankeny Sports Complex in loving memory of Doug and his love for sports. Please send cards to Lysa Youngquist C/O Dyamond Memorial, 121 SW 3rd Street, Ankeny, Iowa 50023.

Doug Frederick, 64, was born February 23, 1956 to Bob & Jan Frederick. He died unexpectedly of cardiac arrest in an ambulance after calling 911 with shortness of breath and tightness in his chest on September 16, 2020 in Ankeny, Iowa. It was... View Obituary & Service Information

The family of Doug Frederick created this Life Tributes page to make it easy to share your memories.

Send flowers to the Frederick family.