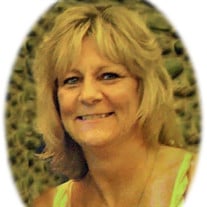 Donna Jean Burch died suddenly Thursday April 19th 2018. Donna was born on November 13, 1961 in Sigourney, Iowa to Howard and Irma (Hunold) Burch. She graduated from Sigourney High School in 1980. While attending she set a track record that stood for 36 years. After graduating she moved to Des Moines to become a certified barber. On March 20th 1982 she gave birth to her son, Johnathon. Shortly after she met her love, Michael Lynch, and they made their home in Redfield, Iowa. While growing up she started riding and showing horses, it would forever change her life. Her love of Arabian horses was shared with her family and friends. She was multi-term president of the Arabian horse Society of Iowa, and Redfield Saddle Club. With the AHSI she was also one of their most invaluable board members. She also showed horses at the national level. Not all of her time was with horses, she had many other hobbies and talents including sewing, gardening, baking, and bringing smiles and good memories to everyone she met. She was preceded in death by her father Howard, but is survived by her partner Michael Lynch, mother Irma Burch, her son Johnathon Burch, her brother Nicholas (Terri) Burch, and sisters Victoria (Gary) Kempf, Deb (Leroy) Striegel, Angela (Ed) Hakes, and Carolyn (Randy) Kirchhoff and 14 nieces and nephews. A celebration of life gathering will take place Sunday, April 29th from 11 a.m. - 4 p.m. at the American Legion on 1113 Thomas Street, Redfield, Iowa. Memorial contributions may be made to the family in loving memory of, Donna. All Floral deliveries may be made to the American Legion in Redfield, Iowa.

The family of Donna Jean Burch created this Life Tributes page to make it easy to share your memories.

Send flowers to the Burch family.