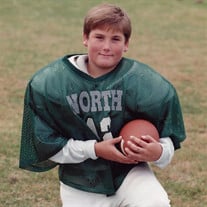 Donald E. Nickel III, 33, of Glenwood, was peacefully set free while surrounded by his family on February 15, 2017. He was born December 15, 1983 in Des Moines, the son of Donald and Kimberly (Willard) Nickel. Donnie spent half of his life growing up in the Highland Park area of Des Moines.  He spent most of his time with his elder sisters, riding bikes and go-carting around the neighborhood. When the family grew by another brother and twin sisters, he absolutely cherished his time with his younger siblings.  With his love of all things sports, especially football and baseball, he spent countless fond hours with his dad who coached him at Highland Park Little League. He was an avid fan of the Chicago Bulls and Bears, as well as the Iowa Hawkeyes.  He loved rap music, and sleepovers on the trampoline with friends from school.  Donnie’s greatest love of all was his mom, whom he always adored.  From the age of 15 on, Donnie resided and was taken care of for over eighteen years by the outstanding team at On with Life rehabilitation center in Glenwood, Iowa. Known for his hilarious sense of humor, and his caring heart, he will be tremendously missed by all his family and friends. He is survived by his parents, Donald Edgar Nickel Jr. and Kimberly Faye Nickel; his sisters Sara Snyder (Ben), Elizabeth Nickel (Aaron), Kylee Nickel (Jacob), Katie Nickel (Lucas), his brother Matthew Nickel, as well as three nieces and three nephews. He also leaves behind his maternal grandmother, Shirley Grimm. He is reunited in heaven with his paternal grandparents Madonna Jean Nickel and Donald Edgar Nickel Sr., and maternal grandfathers William Willard and Donald Grimm.   Celebration of Life Service will be 1:00PM Sunday, February 26, 2017 at Merle Hay Funeral Home, 4400 Merle Hay Road, Des Moines, Iowa. The family would like to extend appreciation to On with Life for the wonderful care that Donnie received while he was there. In lieu of flowers, the family asks that you consider donations to On with Life at 714 Lacey St., Suite 100, Glenwood, IA 51534 in loving memory of Donnie.

Donald E. Nickel III, 33, of Glenwood, was peacefully set free while surrounded by his family on February 15, 2017. He was born December 15, 1983 in Des Moines, the son of Donald and Kimberly (Willard) Nickel. Donnie spent half of his... View Obituary & Service Information

The family of Donald Edgar Nickel III created this Life Tributes page to make it easy to share your memories.

Send flowers to the Nickel family.