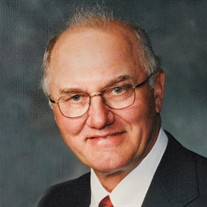 People person. Salesman. Entrepreneur. Mentor. Incomparable expert on poultry and livestock equipment. Don William Ott was born in St. Lucas, Iowa, on June 17th, 1936. He was John and Margaret (Kuennen) Ott’s oldest son of eight children. Don, 83, passed away peacefully on Saturday, February 22, 2020, surrounded by family. He was baptized and confirmed into the Catholic faith. He attended St. Luke Catholic High School and graduated in 1954. On June 17th, 1958 (Don’s 22nd birthday), he was united in marriage to the love of his life, Doris Boeding, at St. Luke Catholic Church in St. Lucas, Iowa. Together they were blessed with nine children: Denise, Dennis, David, Deanne, Donna, Diane, Debra, Danelle, and Danette; and 19 grandchildren. Don began delivering chicks and feed for Heying Chick Company, which led to his flourishing career as a salesman for Big Dutchman Equipment Company. Toward the end of his tenure, he co-founded BCD, Inc., which sold poultry, hog and livestock equipment. In the early 1970’s, Don founded Ott Equipment Company, in Ankeny, Iowa, a family-owned business that is still in operation today. Traveling for work was the norm for Don, who drove long hours, enjoyed the scenery and could still recite all his routes for years. His hard work ethic, quick wit, and powerful personality will be deeply missed by all those who knew and loved him. Don's passion for his business was surpassed only by that for the love of his family. Later in life, he enjoyed attending auctions with Doris, early-morning coffee with friends, working with metals and pulling the grader with his tractor at Ott Equipment. He often expressed his gratitude for Doris' hard work in caring for their children, home, and business throughout their 61 years of marriage. His children recall summer evenings picking mulberries, sailboat rides, trips in the camper, and so many other great memories. He found great pride and joy in seeing his family expand once the grandchildren started arriving in 1991. Don was a member of Our Lady's Immaculate Heart Catholic Church, where he served as an usher. He became a third-degree member of the Knights of Columbus in 1958, became a fourth-degree member in 1968, and is an honorary life member. Don is survived by his wife of 61 years, Doris Ott; his children, Denise (Tim) Simpkins of Ankeny, IA, Dennis (Sharon) Ott of Ankeny, IA, David (Diane) Ott of Ankeny, IA, Deanne Ryan of Bradenton, FL, Donna (Tim) Osman of Kenosha, WI, Diane (Steve) Hustedt of Ames, IA, Debra (Johnny) Moller of Des Moines, IA, Danelle (Bob) Rutledge of Longmont, CO, and Danette Ott (Jonathan Curtin) of Santa Barbara, CA; and his grandchildren, Shanna & Wil Simpkins, Dylan & Danielle Ott, Dallas Ott, Clayton & Sable Ryan, Daphne Osman, Halei, Sydney, Tate, Dane, Trent & Emmy Hustedt, Cameron & Kaleb Randel, and Drew & Eden Rutledge; and sisters, Shirley (Del) Schmidt and Mary (Greg) Whitmore; along with brothers, Floyd (Laurie) Ott, Jean (Mary Ann) Ott, Ken (Carol) Ott, and Jim Ott. He was preceded in death by parents, John and Margaret Ott; brother, Steve Ott; son-in-law, Cliff Ryan; and granddaughter, Dyamond Ott. We will, most of all, remember Donald William Ott fondly as the loving husband of Doris, devoted father of 9 children and doting grandfather of nineteen grandchildren. Not to mention, a friend to countless others. In lieu of flowers, memorials in Don’s honor may be directed to Our Lady’s Immaculate Heart Catholic Church Foundation, 510 E. First Street Ankeny, IA 50021 *** The Ott family would like to thank Don's many great friends and neighbors at Vintage Hills Cooperative at Prairie Trail, customers, and colleagues from over the years, as well as the wonderful caregivers at The Vintage Hills, in Ankeny, and Kindred Hospice. A special thanks to Debra Ott Moller and Johnny Moller at Dyamond Memorial for their love and services. We also express our gratitude to Father Phil Kruse, Father Steve Orr, and Father Michael Amadeo for many years of spiritual guidance and support. *** The good Lord made us all out of iron. Then he turns up the heat to forge some of us into steel. -Unknown

The family of Don William Ott created this Life Tributes page to make it easy to share your memories.

Send flowers to the Ott family.