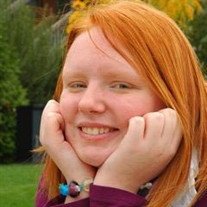 Danna Marie Rains, 19, of Grimes, died March 2, 2015, at home with family due to complications from several medical conditions, including mitochondrial disease, postural orthostatic tachycardia syndrome, and dysautonomia. Danna was born on April 12, 1995, in Creston, Iowa, to Carla Rains and Jamie Buffington. She grew up mostly in central Iowa, most recently living in Polk City and Grimes. Danna attended North Polk High School and Dallas Center-Grimes High School, graduating from DCG in May 2013. Danna drew great strength from her faith and was always eager to help others, despite her medical condition. As her health failed, she set about completing as many items on her bucket list as possible alongside her family and friends. She enjoyed her time spent with people at home and the rare moments she was able to go somewhere for a special event. Danna's courage in the face of her condition provided inspiration to those she knew and met, and she made many new friends along the way. Danna is survived by her mother and stepfather, Carla and Jon Britton; sister, Kimberly Britton; father and stepmother, Jamie and Laci Buffington; siblings Fischer and Kaelee Sue Buffington; grandparents Debra and Dale Buffington; grandmother Darlene Britton; grandparents Glenda and Duane Adamson; aunt and uncle Carrie and Kelly Adamson; uncle Larry Rains; aunt, Cheyenne Rains; uncle, Dakota Rains; aunt and uncle Stacey and Chris True; aunt and uncle Shawn and Breanne Buffington; great grandfather Harry Wiechman; her dog, Toby; and many other family and friends that Danna held dear. She was preceded in death by many loving grandparents and great grandparents, and two special uncles, Jeremy Rains and Brian Rule. A Celebration of Life Service will be held at 2 p.m. Thursday, March 5, 2015, at Johnston Evangelical Free Church, 9901 NW 62nd Ave., Johnston, Iowa. Visitation will be one hour prior to services on Thursday at the Johnston Evangelical Free Church Memorial contributions can be directed to the family in loving memory of Danna. “And she never stopped walking”

The family of Danna Rains created this Life Tributes page to make it easy to share your memories.

Send flowers to the Rains family.