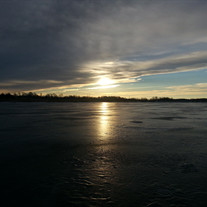 Charles "Charlie" John Spurbeck, 66, passed away Saturday, April 26, 2014 at Taylor House in Des Moines, IA surrounded by his loving family. A Celebration of Life will be held at 11:00 a.m. Wednesday, April 30, 2014 at Ankeny First United Methodist Church with Reverend Martha Ward officiating. The family will greet friends one hour prior to services. Military Honors will be conducted by the Albaugh-McGovern American Legion Post #42. For more information or to send condolences, please visit www.dyamondmemorial.com or call (515) 964-7543. Charles John Spurbeck was born May 3, 1947 to Herschel and Betty Spurbeck in Waverly, Iowa. He was Baptised and Confirmed at the First Methodist Church. Charles attended Waverly Schools and Hawkeye Tech in Waterloo, Iowa. He served in The United States Navy from April 1967 to July 1971, during which time he served on two tours in Vietnam aboard the U.S.S. Pluck an ocean-going minesweeper. He married Joyce Spree on December 20, 1967 and to this marriage two children were welcomed, Matthew Spurbeck on June 22, 1973 and daughter, Monica Spurbeck on January 22, 1975. Throughout his life he enjoyed fishing, boyscouts, bowling and coaching his son and daughter's ball teams. He also enjoyed watching his grandchildren play sports and loved being with his family. Left to cherish his memory is his wife, Joyce Spurbeck of Ankeny, IA; son Matthew Spurbeck of Ankeny, IA; daughter, Monica (Jim) Spurbeck Sutter of Urbandale, IA; grandchildren: Cole Spurbeck, Kaylee Spurbeck, Mason Sutter, Logan Sutter, and his mother, Betty Spurbeck.

The family of Charles "Charlie" John Spurbeck created this Life Tributes page to make it easy to share your memories.

Send flowers to the Spurbeck family.