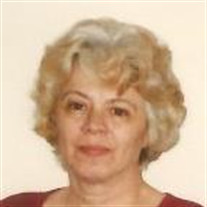 Carol Sue Wilson (Fulks) age 71 of Pleasantville, IA died March 14, 2015 at Taylor House Hospice in Des Moines, Iowa of respiratory failure resulting from lung cancer Carol was the first-born child of Harold U. Fulks and Mary E. Barker in Clarion, IA on August 6th, 1943. She graduated from East High in Waterloo, IA where she was a member of the Sextet and enjoyed singing before civic, social groups, and school events. Carol's last employer was BTI Trucking. Many drivers around the country will remember her as "The Dragon Lady", dragging them in from the road to fix their logs. She enjoyed raising and showing Borzoi dogs and her Arabian horses. Carol gardened with a passion and gave back to the community throughout 20 years of being a Lioness. She is survived by her husband David of Pleasantville; four children, Rory Braniger of Des Moines, IA; Christopher Braniger, wife Audrey of Seymour, MO; Laura Coons (Holgate), husband Jay of Norwalk, IA; and Brian Holgate of Des Moines; four stepdaughters and one stepson, 19 grandchildren, nine great-grandchildren. Her four brothers Harold Fulks Jr. of Shell Rock, IA; Mike Fulks, wife Lorene of Waterloo; David Fulks, wife Kathy of Waterloo; Jim Fulks, wife Cyrenna of Waterloo; and two sisters, Rachael Lampson (Fulks), husband Charles of Shell Rock; Mary Grandon (Fulks), husband Miles of Aplington, IA; along with many nieces, nephews, and cousins. She was preceded in death by her parents and also three stepsons; Robin Holgate, Stephen Holgate and John Michael Schutte.  A service will be held at Willow Creek Baptist Church, 720 Army Post Rd., West Des Moines, IA 50265, on April 4th, 2015 starting at 4pm, followed by a dinner. The Pleasantville Lions & Lioness will hold a benefit dinner and remembrance of Carol at the Pleasantville Methodist Family Center, 104 S Columbus St., Pleasantville, IA 50225 from 3 pm to 5 pm on April 11th, 2015. Carol and her husband David are Seventh Day Adventist and will not be asking for donations in Carol's name to a specific charity, rather we hope you express your love and charity daily.

The family of Carol Sue Wilson created this Life Tributes page to make it easy to share your memories.

Send flowers to the Wilson family.