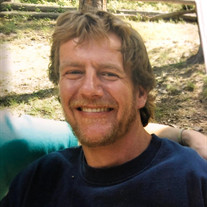 Brahms Wolfgang Schmidt October 25th 1966 – October 24th 2020 Born in San Francisco, California Resided in Des Moines IA. Brahms Wolfgang Schmidt, 53, of Des Moines, passed away from this life on October 24 at Azria Health in Winterset IA, surrounded by the love and comfort of his family and friends! Brahms was born in San Francisco CA, on October 25, 1966. He was the son of Vickie Ramey and Wolfgang Schmidt. He was a proud graduate of College Park High School, Pleasant Hill CA, in 1985. Afterwards, he attended Wyoming Tech in Laramie WY, where he studied to be a diesel mechanic, and graduated in 1987. During his childhood and teen years, he traveled back and forth from California to South Dakota to visit his mother and father. While in Laramie WY, he met Trixie Neil. They married in the Black Hills in 1990, lived in Des Moines and purchased a home in Beaverdale, where they became proud parents of their son, Hagin, in 1992. While he lived in Iowa, he worked as a self-employed carpenter, mechanic, cable installer, plumber, painter and framer. He lived the rest of his days in a nice home in Ankeny IA spending time with his son and friends. Brahms was preceded in death by his grandparents in California and in Germany and his mother, Vickie Ramey. He is survived by his son, Hagin Schmidt (Brooklyn), Des Moines IA, his father, Wolfgang Schmidt (Kathy), Black Hills SD, his brother, Paul Schmidt (AnnDee) as well as his niece, Haleigh Schmidt, and his nephew, Riley Schmidt, who all reside in the Black Hills. Visitation services will be held 1-3pm on October 31st at Ankeny Church of the Brethren, 417 SE Grant Street, Ankeny, Iowa. We are following the CDC guidelines, please wear a mask and social distance, thank you!!

The family of Brahms Wolfgang Schmidt created this Life Tributes page to make it easy to share your memories.

Send flowers to the Schmidt family.