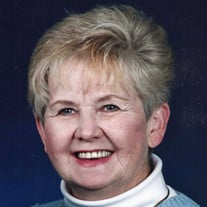 Betty (Long) Clarken, daughter of Hermon and Elsie (Westrum) Long, was born April 11, 1938 in rural Dayton, Iowa. Betty graduated from Webster City High School and then pursued a professional dancing career. She taught dance class and led the local drill team for several years. On May 20, 1956, she married Harold Clarken of Corwith, Iowa. They lived in Webster City, Humboldt, West Des Moines, and Waukee, Iowa. She was a member of St. Boniface Catholic Church in Waukee for 48 years. She was preceded in death by one son, Danny Clarken, a sister, Bonnie Long in infancy, and both of her parents. Survivors include one son, Kevin (Julie) Clarken, and three daughters, Debra Hueholt-Hartman, Michelle (Todd) Van Maanen, and Annette (Grant) Duncan. She cherished her eight grandchildren- Jared (Meghan Walter) Hueholt, Erin (Joseph) Hill, Kelsey Ihde, Taylor Sullivan, Jesse Van Maanen, Molly Ihde, Daniel Clarken, and Justin Clarken as well as four great grandchildren, Wylie, Dawson, Amesley, and Natalie. She recently wrote about her children and grandchildren that, "Those, of course, are my greatest accomplishments and rewards." Betty died on April 29, 2014 at Mercy West Lakes Hospital in West Des Moines, Iowa from respiratory complications. She was surrounded by her family and close friends as she peacefully and gracefully passed away. Mass of Christian Burial will be 11:00 AM, Monday, May 5, 2014 at St. Boniface Catholic Church in Waukee, Iowa. Visitation with the family present will be 4:00 pm-6:00 pm Sunday, May 4, 2014 at the Ernst Funeral Home in Waukee, Iowa, with a Prayer Service at 6:00 pm. For more information or to send condolences, please visit www.dyamondmemorial.com or call (515) 964-7543. Memorial Contributions may be made to the family in loving memory of Betty Clarken.

The family of Betty (Long) Clarken created this Life Tributes page to make it easy to share your memories.

Send flowers to the Clarken family.