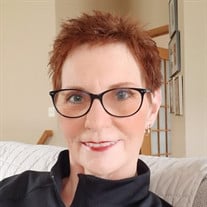 Angela Gail Matthews was born in Spencer, Iowa to Clifford Matthews and Arlene (Lyons) Matthews on June 12, 1953. She was welcomed home by older sister, Judy. She spent her younger years in Linn Grove, Iowa. She attended Sioux Valley School and was very active as a cheerleader, six on six basketball player, softball player and a majorette. Angela was united in marriage with Dale Reese at the Riverside Presbyterian Church in Linn Grove, Iowa on August 7th, 1971. From this union they were blessed with two children, Derek born on November 12, 1972 and Erin born on June 24, 1975. She was involved in various activities throughout her entire life, including Jayceettes. She was involved with the Riverside Presbyterian Church in Linn Grove, Iowa and also the United Methodist Church in Peterson, Iowa. Angela was a school cook at Sioux Valley School in Peterson, Iowa from 1980-1985 and was an avid gardner and a Master Gardener. She also enjoyed spending time volunteering at the Des Moines Botanical Gardens. Angela and her family moved to Des Moines in 1985. Shortly thereafter, she began her banking career for several Des Moines area banks, working her way from teller to Senior Vice President. She retired from First Bank in 2013 as Senior Vice President in West Des Moines. Angela was united in marriage with Thomas Donald Worrell in March 1996. Don and Angela enjoyed traveling, spending time with family and friends, and enjoying time with the first two grandchildren. Angela was united in marriage with James Todd on October 29, 2005. Angela and Jim spent nearly 20 wonderful years together. The next two grandchildren joined the family during this time. Many barbecues were pool side at their home with family and friends. Their biggest priority was always the grandkids, having fun and spoiling them. Angela moved to Peoria, Arizona February 2021. She passed away at home on October 6, 2021. She is preceded in death by her parents. Left to Cherish her memory are her children, Derek (Pam) Reese of Des Moines, Iowa, Erin (Kevin) Mueller of Johnston, Iowa; husband, James Todd of Peoria, Arizona; grandchildren, Emma Reese, Dean Reese, Jaden Mueller, Jackson Mueller; sister, Judy Petersen of Omaha, NE; one niece and two nephews; mother-in-Law, Jean Todd; sisters-in-law, Patty (Chris) Bartholf and Jay Todd. Along with many other relatives, friends, and of course her beloved dog, Hank and two cats, Bill and Opal. A service and celebration of life will be held for Angela on October 30, 2021, 2 pm - 5pm, at the Johnston Lions Club, 6501 Merle Hay Rd, Johnston, IA 50131. The service will begin at 2 pm with a celebration of Angela’s life following. Please join us for any part of the celebration. Flower's may be delivered to the Johnston Lion club after 1 PM on Saturday the 30th.

The family of Angela Gail Matthews created this Life Tributes page to make it easy to share your memories.

Send flowers to the Matthews family.